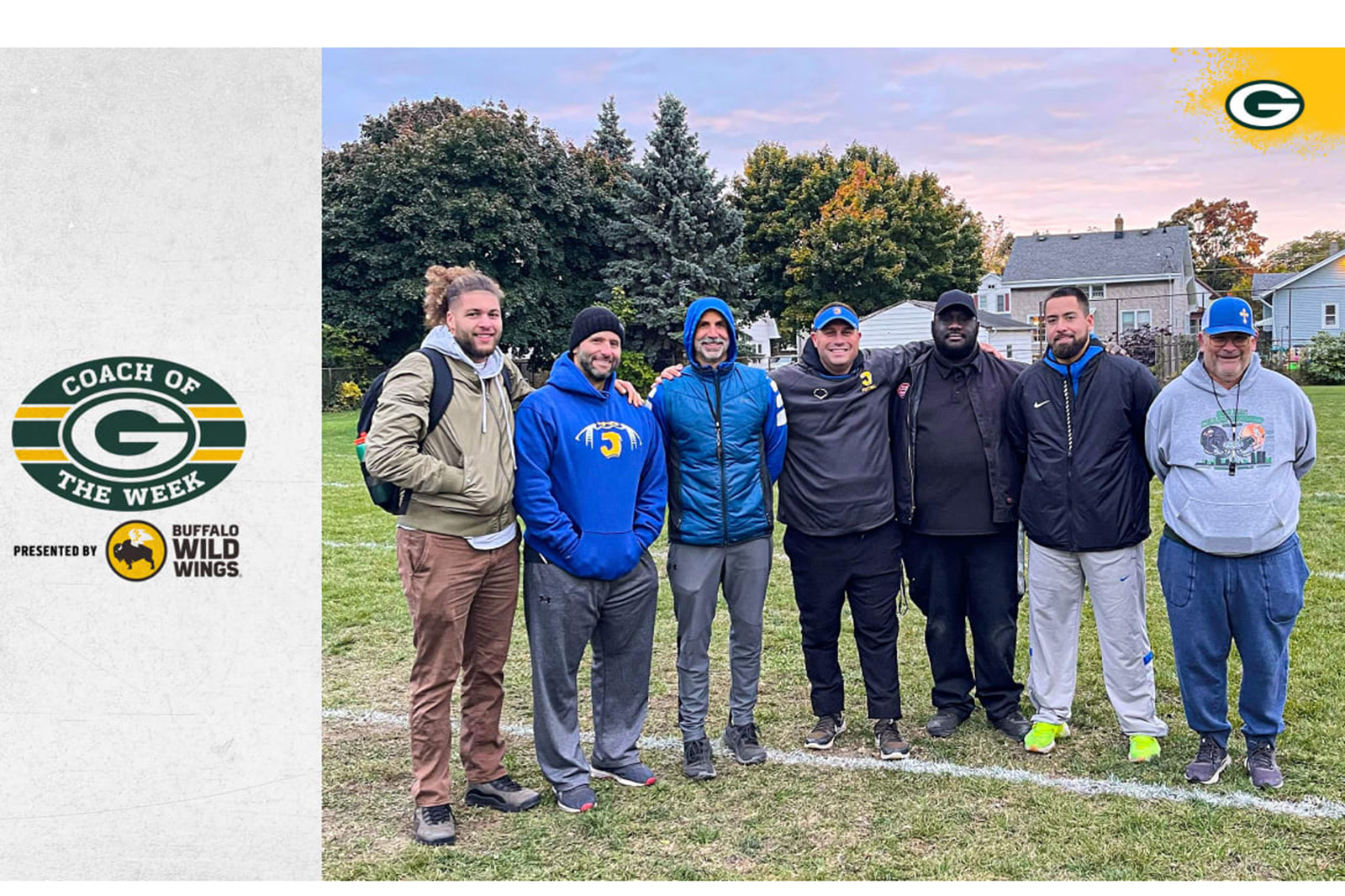 The Packers will recognize one outstanding high school coach as their Coach of the Week winner during the 2022 high school football season. Winners are awarded several items and privileges, including a $2,000 donation to the school's football program from the Packers, Buffalo Wild Wings and the NFL Foundation.

The Green Bay Packers have announced that Matt Rizzo of St. Joseph Catholic Academy in Kenosha has been named the Packers High School Coach of the Week. The program is presented by Buffalo Wild Wings.

Rizzo, in his fourth year as the head coach of St. Joseph, led the Lancers to a 28-7 victory over Racine Lutheran on Friday, Oct. 14. The win concluded the second consecutive undefeated regular season for the program. When Rizzo took over as head coach in 2019, the Lancers had 21 players on their roster and were coming off a 4-5 season. Since then, Rizzo has been able to more than double the size of the program and develop a winning culture. Part of that transformation has been due to the buy-in from the Lancers’ senior class.

“This senior class, as of today, they’ve had 22 wins in the last two years to one loss,” Rizzo said. “They went from five wins as freshmen, then we had the COVID year. Like many other coaches and their kids, they’ve gone through a lot in their high school career. So, they have over 30 wins over their four years as a senior class and I’m really proud of them. It does take a team, a collective effort. We really have a family atmosphere. I know that’s kind of cliché, but our kids really put others first and it’s all a part of our mission here to serve others.”

Rizzo grew up in Kenosha and attended Tremper High School. As a member of the Tremper Trojans, Rizzo played wide receiver and defensive back for Tom Follis and Wisconsin Football Coaches Association Hall of Fame member Frank Martise, Jr. Following his graduation in 1999, Rizzo played wide receiver at UW-La Crosse under WFCA Hall of Fame members Roger Harring and Larry Terry. Rizzo received his bachelor’s degree in 2003 and then his masters from Carthage College in 2006.

Rizzo’s coaching career began as a student assistant at UW-La Crosse in 2003 and Carthage College during the 2004 and 2005 seasons. In 2006, Rizzo joined his high school alma mater’s coaching staff at Tremper until 2013 when he took over as head coach at Bradford. Rizzo was head coach of the Red Devils for five seasons, until he was named head coach of the Lancers in 2019.

Rizzo is honored to win the award and attributes it to his players and those around him.

“I think the award means a lot, but it means that we have a good team and good coaches,” he said. “It’s really a testament to them, their buy-in, and their execution on Friday nights. Coach of the Week is awesome, I’m honored and humbled by it, but it’s really because I have good kids and good coaches to support our mission.”

Rizzo and his staff oversee a program of 42 players. His assistant staff includes Collin Patrick, Bill Vassos, Eric Kenesie, Damon Williams, Kyle Griffin, and Larry Kamin. In addition to coaching, Rizzo is the President at St. Joseph Catholic Academy. Rizzo and his wife, Leah, have one daughter, Bella, and one son, Zach.

About the Green Bay Packers High School Coach of the Week Program:

The Packers will recognize one outstanding high school coach as their ‘Coach of the Week’ winner during the 2022 high school football season. Winners are awarded several items and privileges, including a $2,000 donation to the school’s football program from the Green Bay Packers, Buffalo Wild Wings and the NFL Foundation, as well as recognition of the award on Packers.com, WisSports.net and WIFCA.org. Nominations for Coach of the Week should be submitted by 10 a.m. every Monday to Ryan Fencl, Football Outreach Manager, at coachoftheweek@packers.com. Please include the nominee’s name, address, school, phone number and reason he/she is deserving of the award.