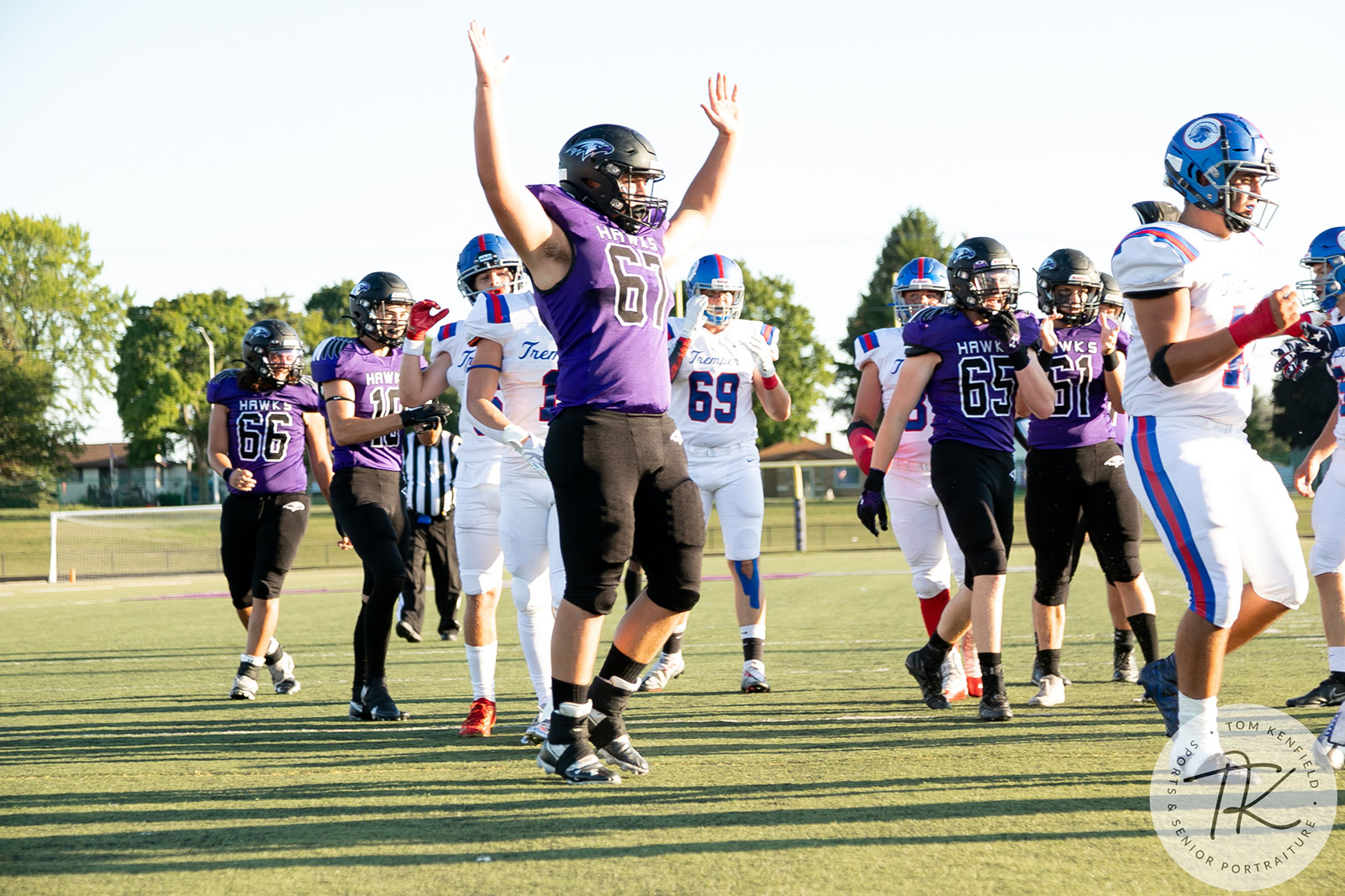 Wearing a grin that could’ve covered one sideline to the other on a picture-perfect Friday night for high school football, Indian Trail High School and Academy senior Aiden Burrell-Warfield basked in the glow of doing something linebackers don’t often get the chance to do.

Burrell-Warfield took an interception about 35 yards to the house to highlight a huge second half for Indian Trail, which busted loose from a scant two-point halftime lead for a 48-12 victory over Southeast Conference and city rival Tremper at Jaskwhich Stadium.

“I just read the line, and then I just did what my coaches told me to do,” Burrell-Warfield said. “Play disciplined, play the way I should, and it just all worked out. The ball was just right there. Took it to the crib.”

Lovelace, the inaugural Kenosha.com High School Athlete of the Week after scoring five touchdowns against Racine Park the previous week, has now totaled an amazing 16 touchdowns in four games for the Hawks, who improved to 3-1 overall and 2-0 in the SEC and are averaging a whopping 50.8 points per game.

Dagen himself ran for 168 yards on 20 attempts, including a pair of second-half touchdowns, and added 76 passing yards.

He said the Hawks felt they were close to busting loose from the Trojans after leading just 14-12 at halftime.

“It starts up front with our O-line,” Dagen said. “They’ve just got to get their blocking. We kept saying, ‘One more block, one more hold.’ Once we got loose, me and Justice (went).

“Looking at the film, we were like, ‘Oh, just right there, right there.’ But they just kept slipping off. In the second half, we got it done.”

For Tremper, which dropped to 1-3 overall and 0-2 in the SEC, junior quarterback Mason Prozanski passed for 93 yards and a touchdown and also ran for a score and senior receiver Jordan Parker caught three passes for 78 yards and a score.

The Lancers, ranked No. 7 in Division 6 in this week’s WisSports.net state coaches poll, improved to 4-0 overall and 2-0 in the Midwest Classic this season and have outscored their opponents 164-14, including three consecutive shutouts.

“It feels really good,” Gordon said. “Coming off a strong start like this, just ready to keep going.”

It was the first win over the Demons in more than a decade for the Falcons, who broke into the WisSports.net Division 2 state coaches poll this week, clocking in at No. 9, and improved to 4-0 overall and 2-0 in the SLC.

Junior Mason Mitacek returned a kickoff 95 yards for a touchdown in the first quarter for Central, junior linebacker Sam Sippy returned an interception 45 yards for a score in the second and junior Collin Meininger and senior Nick Argersinger combined for 128 receiving yards.

Bradford led 7-0 in the second quarter before Case scored 28 unanswered points in an SEC game at Bradford Stadium.

Wilmot suffered its first loss of the season in an SLC blanking by Badger in Lake Geneva.

Shoreland fell to St. Catherine’s in a Metro Classic Conference game at Shoreland.

Senior Will Craig rushed for 79 yards and a touchdown and junior Joseph Kayon added 75 rushing yards to lead the Pacers (1-3, 1-1 Metro Classic).