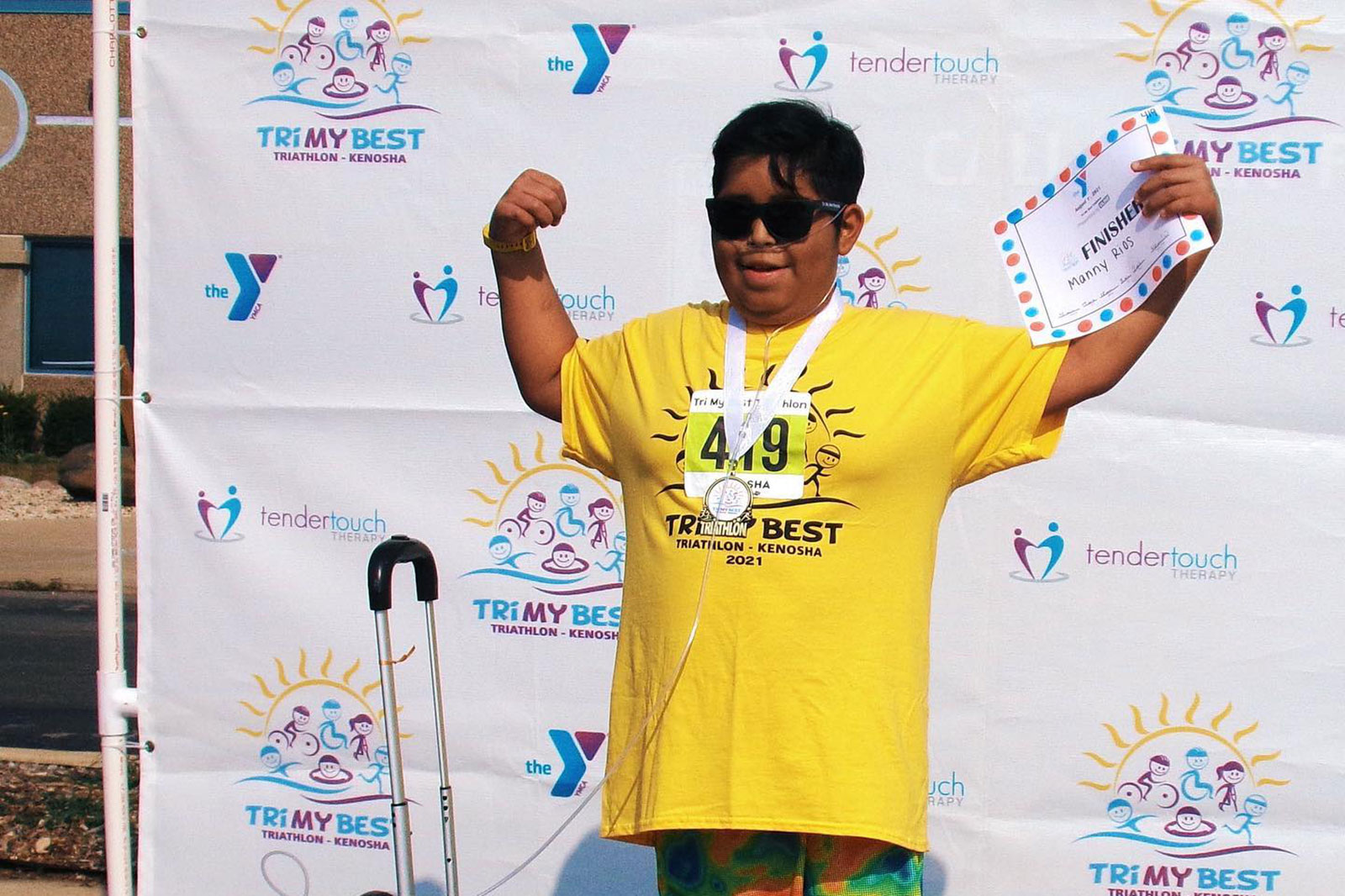 The Tri My Best Triathlon for children and young adults with developmental disabilities, set for Sunday (Aug. 7) at the Kenosha YMCA, is a treasury of triumphant stories with each of the nearly 100 participants writing their own heartwarming chapter.

One particular chapter packs a one-two punch of inspiration and motivation, along with a double-dose of Kenosha community leadership.

Veteran Tri My Best athlete and heart transplant recipient Manny Rios has teamed up this year with volunteer Brandon Morris, well known in the Kenosha community for his roles in athletics, education, and the Building our Future initiative, among other endeavors.

Morris said he didn’t hesitate when asked to partner with Manny in this year’s Tri My Best event.

“I didn’t even ask why, I just said ‘Yes!’”  said Morris, who was the St. Joseph Catholic Academy basketball coach when he first met Manny, then a Lincoln middle-schooler and the Lancers’ student manager. As fate would have it, they both ended up at Tremper last year, with Morris as head hoops coach and Manny as a freshman student.

“When he came to Tremper I asked him to be our manager, and we’ve been buds ever since,” said Morris. “I’m extremely impressed with Manny and his story and just his whole approach to life and the things he involves himself in and the way he goes about it all.

“I love him so much, he’s made me cry four or five times throughout the season just because of his energy,” Morris said. “On the first or second day or practice, I used him as an example to the team and definitely made his mom teary eyed.”

As a coach and community leader, Morris is able to motivate others through the way he makes a living. Manny, a soon-to-be sophomore who underwent his life-saving transplant at age 10, inspires others just by living.

When Manny was just six days old, doctors discovered that he had only half a heart. They broke the news to his mother, Anna Rios, that most babies with this condition don’t make it. A talented team at Children’s Hospital and an incredibly strong family saw baby Manny through several open heart surgeries. He beat the odds and grew stronger, even though he required constant oxygen and seemingly endless surgeries and tests.

He fought on through it all, but eventually his weakened heart could no longer sustain him. Doctors brought up the need for a transplant while Manny was still in elementary school. His health was deteriorating rapidly, to the point where he was too sick to take a scheduled Make-a-Wish trip to Disney World in spring 2017. A transplant was his only hope.

Days after Manny completed fourth grade, Anna got the fateful phone call. Manny received a life-saving heart transplant June 17, 2017 at Children’s Hospital of Wisconsin in Wauwatosa. It’s impossible to account for all the dedication, strength, and love that surrounded Manny in his recovery, but those involved are quick to point to Manny as the real star of the show. With a combination of bravery and good humor, he entertained his entire pediatric cardiac wing with dance lessons and jokes, and impressed the doctors with his physical progress. He emerged from weeks in the hospital with a healthy heart to match his always thriving spirit.

Anyone who meets Manny knows he is not going to settle for “just living.” The gift of life he received from an organ donor allows him to pursue his deep love of sports and his long-term goal of encouraging others to live a healthy lifestyle through movement and activities. The teen is now an ambassador for the American Heart Association, annually gathering donations of all types of balls for sports from football to four square. He breaks his donation record each year and has no plans to stop.

Coach Morris cited that spirit as one of the many things he’s learned from and about Manny in recent years.

“I definitely learned that Manny is strong-willed,” Morris said. “He is an athlete. He obviously loves sports and I learned that he wants to share the importance of physical fitness with others. I’m extremely impressed by how much he’s involved.”

During our interview Morris told Manny: “You’re an activist and you don’t even realize it.”

In his classic comedic style, Manny responded that in fact he does realize it. After all, he was given the nickname “Mayor Manny” by his teachers way back in his Brass Community Elementary School days due to his enthusiastic involvement.

“Mayor Manny” is now a seasoned veteran of the Tri My Best event, which is in its seventh year. It has grown by leaps and bounds, but the format remains the same both here and across the country. Athletes are paired with two “buddies” from a group of over 400 volunteers who provide assistance through the course and also time the races. Distances are based on ability in swimming (25 to 200 yards), biking (quarter-mile and 2 miles) and running (200 yards to 1 mile). The triathlon is open to anyone with special needs including physical, cognitive, emotional or psychological disabilities.

The Kenosha event was founded in 2015 by Linda Niemela, a local physical therapist and president of Kenosha’s Tender Touch Therapy.

“For a lot of these kids, it’s one of the biggest things they get to do all year,” Niemela told Kenosha.com. “It’s amazing to watch the kids and see how excited they get to wear their shirts and get their medals.”

Manny’s first Tri My Best was in 2017 as a spectator/cheerleader, almost immediately after being released from the hospital following his transplant.

“Within that first week we had to go to Tender Touch to get evaluated and they brought it up,” Anna recalled. “So I thought let’s just go and check it out. Manny had a great time, he was over by the finish line with cheerleaders, cheering everybody on as they came through. It was the first big outing with him after the transplant and I remember thinking, ‘Is he drinking enough water? Is he going to pass out?’ He really held his own and had a great time, and we couldn’t wait for him to be able to be in it the following year.”

Flash forward and Manny is not only participating for the fourth time, he’s also upping his game. This year Manny is challenging himself to increase his running distance to the 2 lap/1 mile course, the longest offered at the event.

“I knew I could push through it,” Manny said, adding that one of the things he has learned from Coach Morris.

“He tells me to never give up,” Manny said. “He’s nice, and he’s funny.” That’s high praise from this young man who has been known to be a bit of a comedian himself.

The Rios family said they are thrilled to have Morris on board.

“So what Manny does is when this comes around, we talk about who he wants to be his buddy,” Anna said. “He will think of somebody that inspires him, that has helped him through his journey that would enjoy doing this with him. The first year he did it he picked a special nurse from Children’s Hospital, the second year was his sixth grade teacher, and this year is Coach Morris.”

Among the many for the pairing is that Manny absolutely loves basketball. Morris’ story motivates Manny, including roles as Tremper coach, vice president of Evolution Basketball, and a former NCAA Division I basketball player at UW-Green Bay (which happens to be the alma mater of one of Manny’s biggest supporters, his sister Miranda).

“Manny will never give up,” Morris said. “That’s my expectation, obviously, just seeing him over the years, and sometimes when he’s speaking to some of our players, I know he won’t give up in this triathlon.

“I also expect, as I’ve seen over the last four years, is his mom is right there every step of the way. His sister is away at college at the best university in the state of Wisconsin — University of Wisconsin-Green Bay — I know she has been a big support. So I imagine and expect them to be there and to support him, and Manny will be having fun with this and he will be living life to the fullest.”

The toughest parts of the triathlon for Manny are the swimming portion as well as overall endurance. Manny is likely to need oxygen throughout his life, but it has never slowed him down. Now as a teen, he manages it on his own whether on or off the athletic stage.

“He knows his limits and knows when he has to keep it on and when he can take it off. He knows what to do if he starts to feel out of breath,” his mom said. “He recovers pretty quickly.”

The enthusiasm of both Manny and his supporters smooths out those rough spots. Family and friends will be at Sunday’s triathlon to cheer Manny on, and have been busy making signs to use throughout the day, including the last leg of each event to help Manny power through.

“His adrenaline starts going once he comes around that corner. He rips his oxygen off and takes off running,” Anna said..

The inner drive has always been there, and Manny’s improved endurance is attributable to his work with Morris at Tremper and his work as the manager of Tremper’s baseball team. While not many athletes speak fondly of running lines, that usually dreaded drill may be what boosted Manny into the next level. When the line drills start, Manny drops whatever he’s doing elsewhere in the gym to join in, at first using a modified route and gradually building his endurance.

That impressed his coach, to say the least.

“He’s very active in practice, he’s running in the line drills, he is doing everything we ask,” Morris said. “Manny told me that he wanted to be a coach, so I got him a whistle, and he’s blowing the whistle at practice. Then he switched it up on me; he didn’t want to be a coach any more, he wanted to be a player. He wants that jersey. So we are going to be working on that in the years ahead.”

The Tri My Best Triathlon gets underway at 8 a.m. Sunday with Opening Ceremonies at the YMCA, 7103 53rd St. The swimming events are up first in the YMCA pools before moving outside to a re-routed bicycle and running course at the facility’s new parking lot. Parking for spectators is available in the Indian Trail High School lot and shuttles are available.