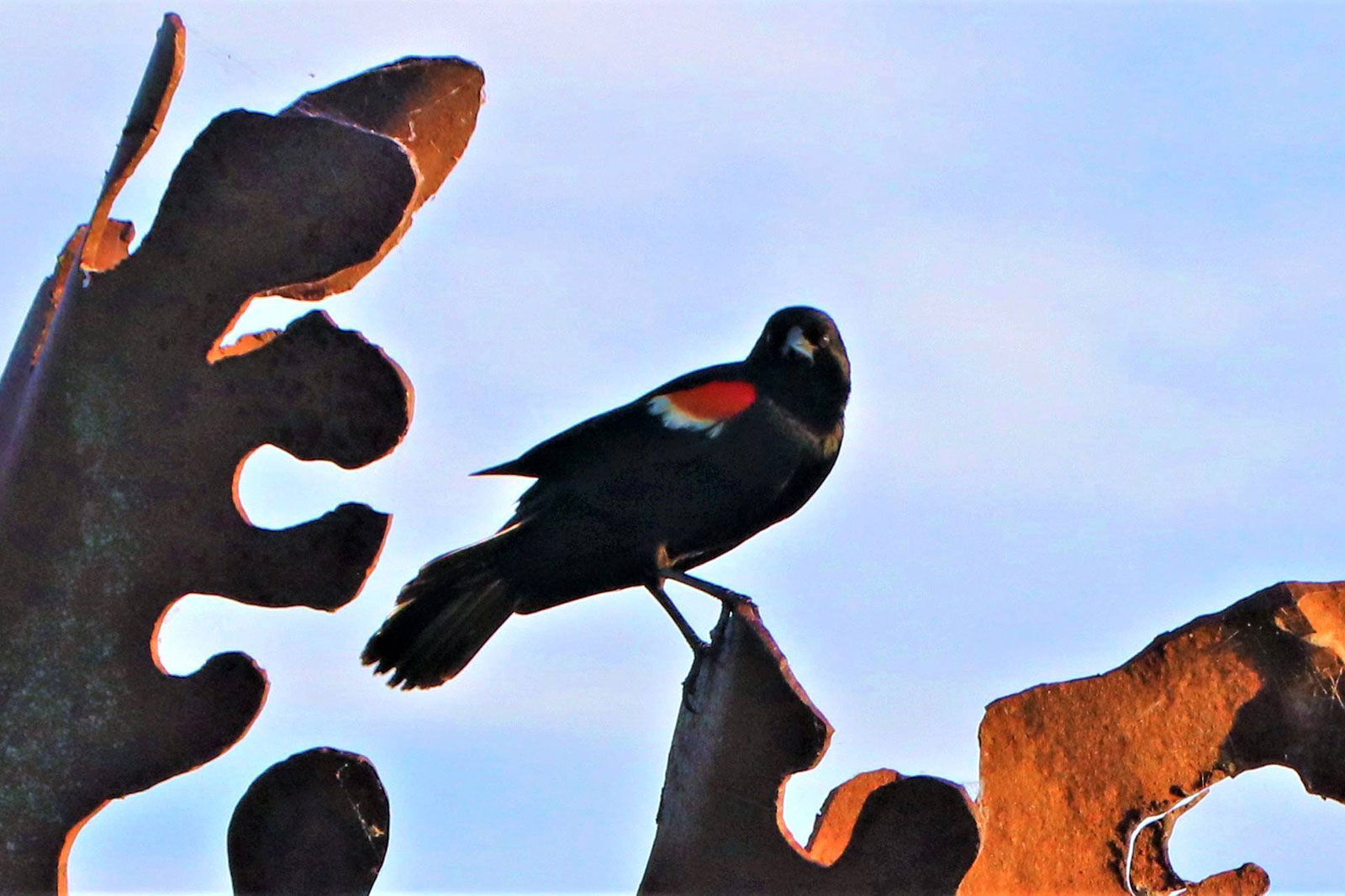 Blackbirds known for aggressive behavior as some locals have discovered

Retired Kenosha County Chief of Staff Jennie Tunkieicz is beloved by many in the community for her years of public service, charming personality and giving nature.

However, it appears she does have one local nemesis: the red-winged blackbird.

“The first time I was hit by a red-winged blackbird was a few years ago when I was walking the sidewalk that runs east-west between the two parking lots for the museums,” Tunkieicz said. “Last year, I was attacked walking at Kenosha County Center. Now, Petrifying Springs.”

The former Kenoshan of the Week joked that it must be her “unusually giant head,” reddish-blonde hair or her love of Alfred Hitchcock movies.

Whatever the reason, she’s not alone.

So we asked local nature photographer and Kenosha.com columnist Thomas Corrao to get to the bottom of these “angry birds” and explain their unfriendly behavior.

Here is Corrao’s wonderful explanation, with plenty of background information, on these territorial birds:

We all need to understand that it’s the season when little baby animals and birds are emerging in nature and that nature is geared towards survival when it comes to these wild creatures.

Of late, I’ve been seeing quite a few baby geese, ducks, and birds around Kenosha’s urban areas. Many of the waterfowl I’m seeing have not developed sufficient feathers to be able to fly so the parent birds are doing whatever is necessary to protect or hide their young from predators.

The red-winged blackbirds are no exception and perhaps take their parental duties a little too far on occasion which has earned them a reputation of being an aggressive bird species.

The truth is though that it is one of the most abundant birds in all of North America and can be found all over Kenosha. I have one that visits my birdbath every afternoon to bathe itself even when it’s raining out.

The red-winged blackbird is a creature of habit that is relatively successful at the survival game.

They are a familiar sight around Kenosha because we have scattered wetlands with brush and high prairie grasses where the birds roost when sleeping.

Kenosha has many trails and sidewalks adjacent to these long prairie grasses, which makes them hazardous to anyone traversing the trails during this time of the year. The worst trails are the ones with telephone lines running alongside them.

This is because the male red-winged blackbirds spend much of the breeding season sitting on high perches overlooking their territories and singing their hearts out as a warning to other birds not to enter their claimed territories.

They also watch for predators and are not afraid to mix it up with anything that they feel gets a little too close for their liking.

Glossy-black males have scarlet-and-yellow shoulder patches they can puff up or hide depending on how confident they’re feeling. This one appears quite confident and ready.

Females are a subdued, streaky brown, almost like a large, dark sparrow. Females build the nests by winding stringy plant material around several close, upright stems and weaving in a platform of wet vegetation before plastering the inside with mud to make a cup.

So why are so many people talking about being accosted by these birds? What I found out by both researching online and visiting the areas in question was that male red-winged blackbirds spend more than a quarter of their day partaking in territory defense.

They chase other males out of their territory and attack nest predators, sometimes going after much larger animals, like horses and people. I even witnessed them attacking a raven that had attempted to get at their nests.

The birds’ fearless ferocity has even caused some communities just south of us to put up warning signs to humans utilizing areas where the birds have nesting territory.

I spent several hours by the Parkside trail trying to get a photograph of an altercation but alas, even though I witnessed several bird strikes, I was unable to get a quality picture for the article.

It was interesting to me that not every jogger was attacked. Some joggers just jogged right through unmolested by the birds while others were struck from behind by the birds.

Red-winged blackbirds are a unique species with an interesting breeding strategy. Although they are one of the first migratory species to arrive in Kenosha in the early spring, they do not lay their eggs until mid-June. Once the eggs are laid in mid-June, it takes about 10-12 days for the eggs to hatch and another 11–14 days for the chicks to develop wing feathers large enough to fly and leave the nest.

The birds will continue to protect their territory until the chicks leave, so expect this behavior through the first couple weeks of July.

So, I do have a couple of recommendations for dealing with these feisty birds if you absolutely need to utilize the trails where these birds are the most active.

First off, wear a hat. While the birds will strike you on your head, a simple baseball cap should be enough to protect your head.

I also found some advice from a naturalist who studied the birds and he suggests that if you’re going to be attacked, turn and face the birds because he states they will not attack from the front, only from behind.

He suggested walking backward until you’ve passed the area where the birds are active. I recommend that if this is how you choose to deal with them, make sure you’re looking behind you, or else the red-winged blackbirds could be the least of your worries.

So there you have it, everything you needed to know about why red-winged blackbirds attack people.

We only have a few more weeks before the baby birds will be able to fly so just hang in there and put a hat on that noggin. As always thanks for taking the time to check out my articles, we’ll be back again next week with another edition of Capturing Kenosha.