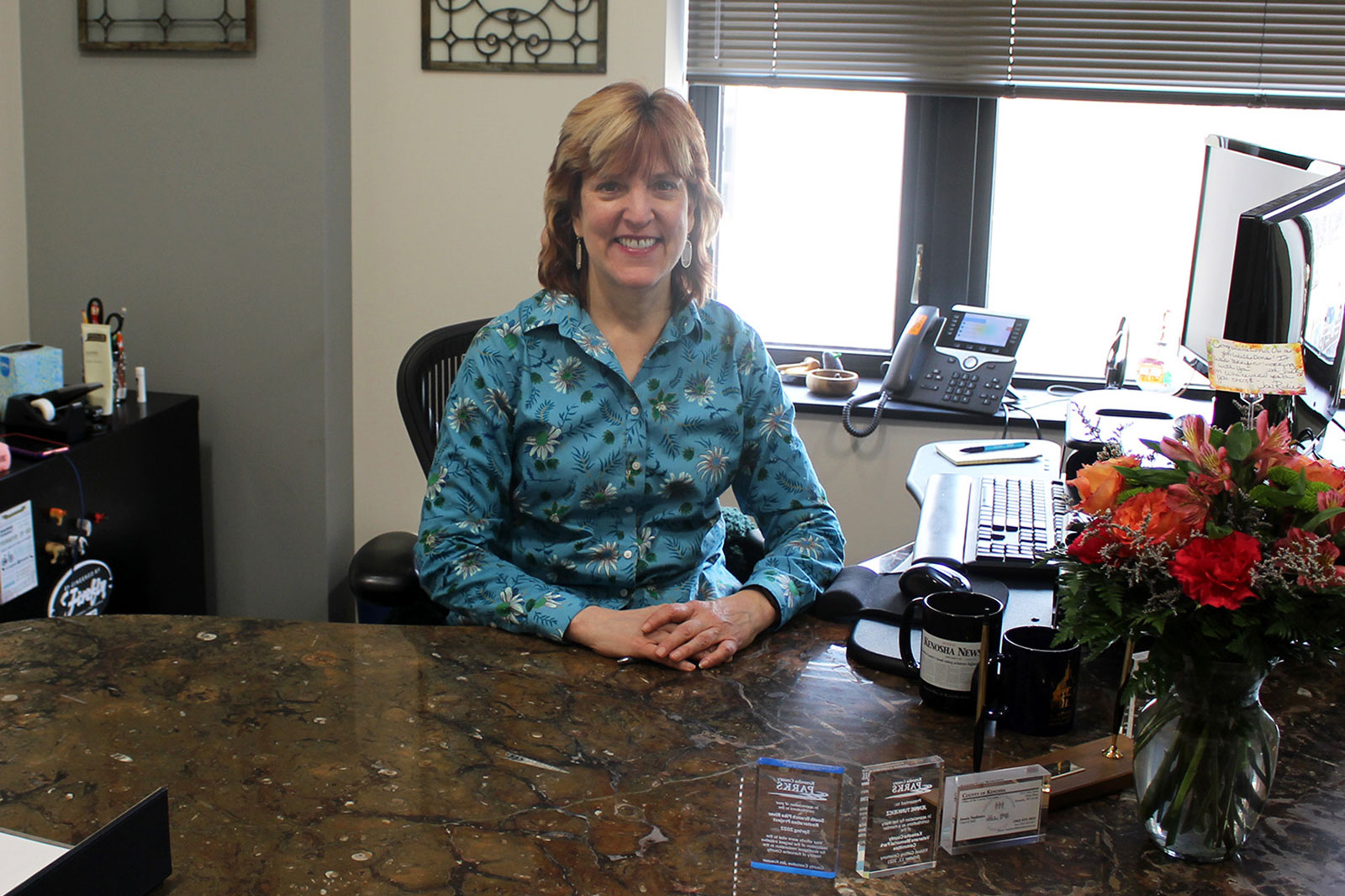 Kenoshan of the Week: Jennie Tunkieicz

As a freshman at UW-Parkside, budding reporter Jennie Tunkieicz walked into the office of the Parkside Ranger and stated her desire to write for the school’s student newspaper.

“They said, ‘Great! Why don’t you interview the student government president and find out what his plans are for the upcoming school year,’” Tunkieicz recalled.

She accepted the assignment and tracked down Jim Kreuser, who was in his second term as the Parkside Student Government Association president.

Kreuser agreed to the interview under one condition.

“He said, ‘OK, but I’m very busy, so if you want to talk to me, you’ll have to follow me on my errands,’” Tunkieicz said. “We went to the library where he had to make copies. Then we went to some professor’s office. We went to the Student Activities Office. Finally, after some other stops, we made it to the Union.”

Tunkieicz wrote her story (“Probably the best story ever written,” she said with a laugh). She saw Kreuser around campus a few times after that and continued working for the newspaper, serving as the editor for two years.

“Lo and behold, to my surprise, Jim Kreuser was working as the Assistant to the County Executive for John Collins,” Tunkieicz said. “I joked then, ‘Look at me. Still following you around with my notebook.’”

Kreuser went on to represent Kenosha in the Wisconsin State Assembly for 15 years. He won re-election seven times for the 64th Assembly District.

In March of 2008, Kenosha County Executive Allan Kehl announced he would be resigning from his position. Kreuser was interested in filling the spot and won the special election without opposition three months later.

When Kreuser was announcing his candidacy, Tunkieicz was “assessing my life’s goals.” In her 10th year as a reporter with the Milwaukee Journal Sentinel, she thought it was time for a change and gave her former interview subject a call.

“I thought, in addition to being a reporter all these years, the main thing I’ve done is cover county government,” Tunkieicz said. “I felt like that was something that I knew. So, I called John Collins and said, ‘I would really like to work for Jim Kreuser.’ He said, ‘Well, you better call him.’

“I was very nervous, but I called him. I said, ‘First of all, I just want you to know I think you would be a great County Executive and great for Kenosha County and I support you. Additionally, I would be interested in working for you, but I want you to know that if that doesn’t work out, I still support you.’”

After making her pitch on how she could be an asset, Tunkieicz found out she was the seventh person to give Kreuser a call inquiring about a job.

The job was hers, though. Kreuser tabbed Tunkieicz as his Chief of Staff.

Her first assignment was keeping her new position a secret until everything was official.

“This job has always been held by a man,” Tunkieicz said. “So, everyone would ask Jim, ‘Who’s your guy?’ He said, ‘The person is going to start 8 a.m. the day after the election.’

“At 8 a.m. the day after the election, I go up to the second floor of the administration building and I see Bob Riedel, who at the time was the human resources director, and I remembered him from when I covered county government. I called out, ‘Hey, Bob Riedel! I’m Jennie Tunkieicz. I’m Jim’s guy!’ The whole room, which was mostly women, went nuts.”

Last March, Kreuser, Kenosha’s longest-tenured County Executive, announced that he would not be seeking re-election in 2022. Just shy of 14 years on the job, Tunkieicz also announced her retirement. Her last day will be Friday, April 22.

Recently honored at the 31st Susan B. Anthony Women of Influence Awards Dinner, Tunkieicz, in recognition of her service to the community, has been selected as the Kenosha.com Kenoshan of the Week.

“Jennie Tunkieicz is the secret to my success as the County Executive,” Kreuser said. “Her work ethic and passion … we have the same ethics and values of public responsibility. It has truly been my honor and pleasure to work with Jennie. She hit the ground running. We were able to get so much accomplished in the last 14 years.”

Tunkieicz did not hesitate when asked what it has been like working for the County Executive.

“Best job I’ve ever had,” she said. “First of all, every day is different in county government. You can plan for one thing, and something happens that turns everything upside down.

“I told Jim early on that I was always going to be honest with him and tell him the truth. We’ve had an excellent working relationship.

Interrupted when emotions got the best of her, she continued: “He always made sure that I had a place at the table. He made sure that my voice was heard. One of the reasons we had to change the title from Assistant to the County Executive to Chief of Staff was that people couldn’t understand, ‘Why is Jim sending his secretary to this meeting?’”

There have been many accomplishments along the way.

“It has been a very active 13.8 years,” Tunkieicz said. “The total renovation of our parks system — Petrifying Springs is just one example. We’ve added amenities like dog parks, multi-use trails, pickleball and disc golf. All of the highway projects that have resulted in an economic development boon for Kenosha County. Human services — the expansion and renovation of Brookside Care Center. It’s been busy, but it’s been fabulous.”

Kreuser referred to Tunkieicz as his “Swiss Army knife.”

“She can do so many things so well,” he said. “It wasn’t a Jim Kreuser administration. It was our team. We both had our dream jobs at the same time.”

As for post-retirement plans, Kreuser is taking a trip to Ireland. His son is also getting married later this year.

Tunkieicz admitted she “could use a bit of a break” before redirecting her passion.

“This is my community,” she said. “I grew up here. I’ve always lived here. I have a vested interest in it remaining strong and vibrant. There are some organizations I hope to get more involved in. I don’t know exactly what those will be, yet.”

The County Executive and his Chief of Staff won’t be strangers after April 22 either.

“Jennie’s husband John and I are friends. Jennie is friends with my wife (Jane),” Kreuser said. “We enjoy each other’s company. We will continue that when we’re out of county government.”

Tunkieicz added: “I joked with Jim the other day that 40 years later I’m still following him around with a notebook.”