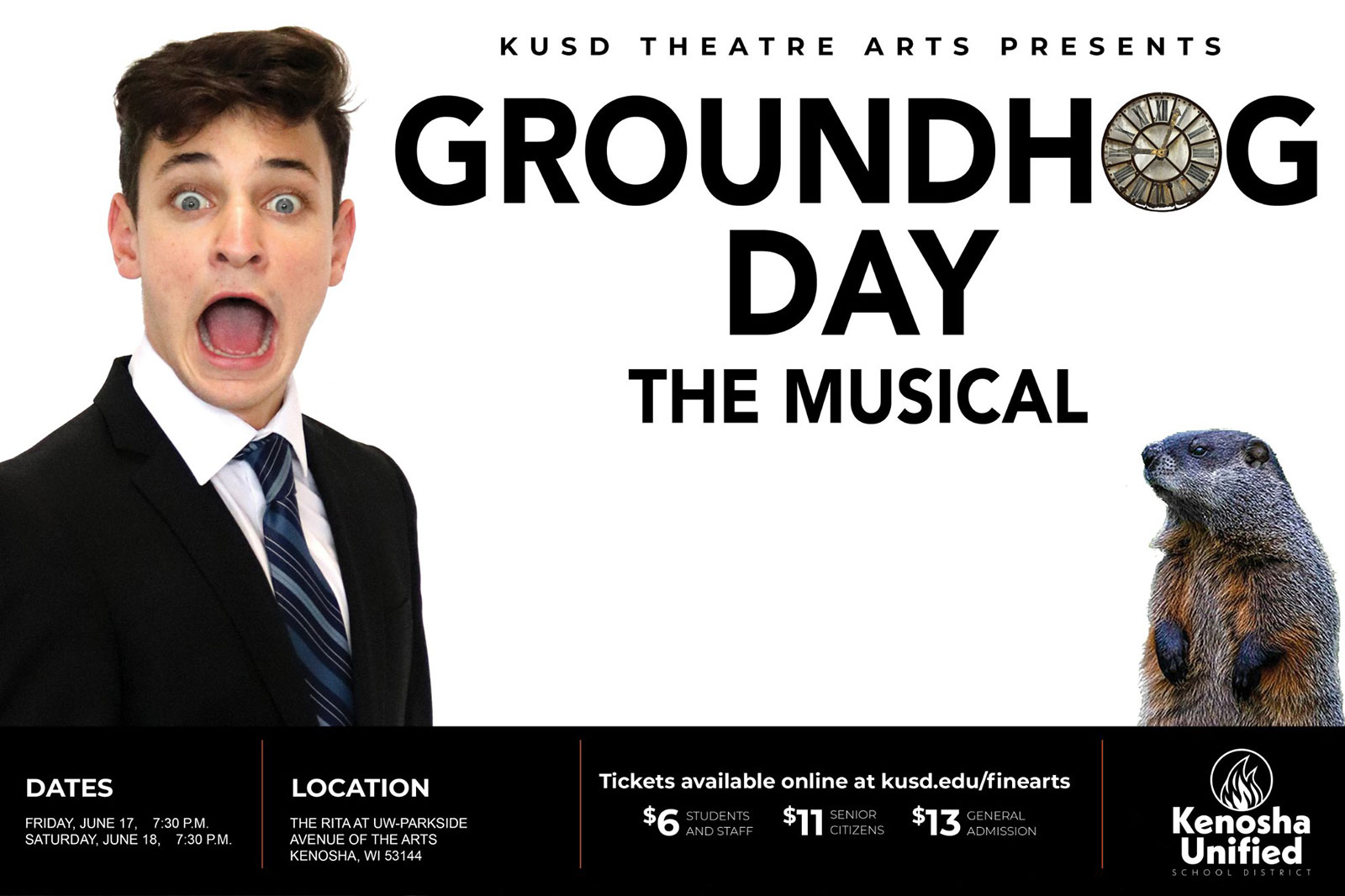 Déjà vu: KUSD’s ‘Groundhog Day: The Musical’ returning to the stage this weekend at UW-Parkside

Musical theater fans who were unable to attend Kenosha Unified School District’s smash hit of the season — or are interested in seeing it again — will have the opportunity this weekend.

Serving as a tune-up for the annual International Thespian Festival, KUSD delivers a pair of encore performances of “Groundhog Day: The Musical” 7:30 p.m. Friday and Saturday (June 17-18) at the University of Wisconsin-Parkside’s Proscenium Theater.

Tickets are available online. The cost is $13 for adults, $11 for senior citizens and $6 for students and KUSD staff.

For a remarkable 16th time, KUSD’s final performance of the season will come on the nation’s most-coveted high school stage at the International Thespian Festival on June 20-24 at Indiana University in Bloomington, Ind.

Kenosha Unified earned its trip for “Groundhog Day: The Musical,” which performed Oct. 29-31 and Nov. 5-7 at Bradford High School.

Connors, a role made famous on screen by Bill Murray, finds himself in a time loop, repeating the same day again and again.

Kenosha Unified is making its first appearance at the International Thespian Festival since performing “Freaky Friday” in 2018. The Festival was previously held at the University of Nebraska-Lincoln campus from 1995 to 2020.

“It’s such a great opportunity for the students,” Williams said. “The theatrical value of it is great. The kids get to work in a new space with professionals and perform in front of a very appreciative crowd with some serious rock-star energy.

“They’ll also have the opportunity to attend all-day workshops specific to their interests whether it’s technicians, actors, singers or dancers. They’ll meet people from all over the country and international groups as well. It’s just an all-around fantastic, positive trip for the students.”

Other high schools invited include New Albany (Ind.) with Disney’s “Beauty and the Beast,” Washburn Rural (Kan.) with “The Book of Will,” Paola (Kan.) with “Bus Stop,” North Broward Preparatory School (Fla.) with “Catch Me If You Can,” Jemicy School (Md.) with “The Curious Incident of the Dog in the Night-Time” and Lincoln Southwest (Neb.) with “Kinky Boots.”

The 1,460-seat auditorium, modeled after the Metropolitan Opera in New York City, is renown for its advanced acoustical design and technical capabilities

In addition to the 40-plus cast members, there are six KUSD staff members, six chaperones, 11 musicians and four technicians set for the five-day trip to Bloomington.

Weight Management and Nutrition Services: More Than What You Eat

Every patient has a different medical history and varying underlying conditions. Looking beyond just weight is imperative for patient success.

Pillar Health set to open in September on Washington Road

New on the scene, Tacos El Fuego has a menu item that is a huge hit

Kenosha Calendar: Harmony Fest to start the weekend on a high note