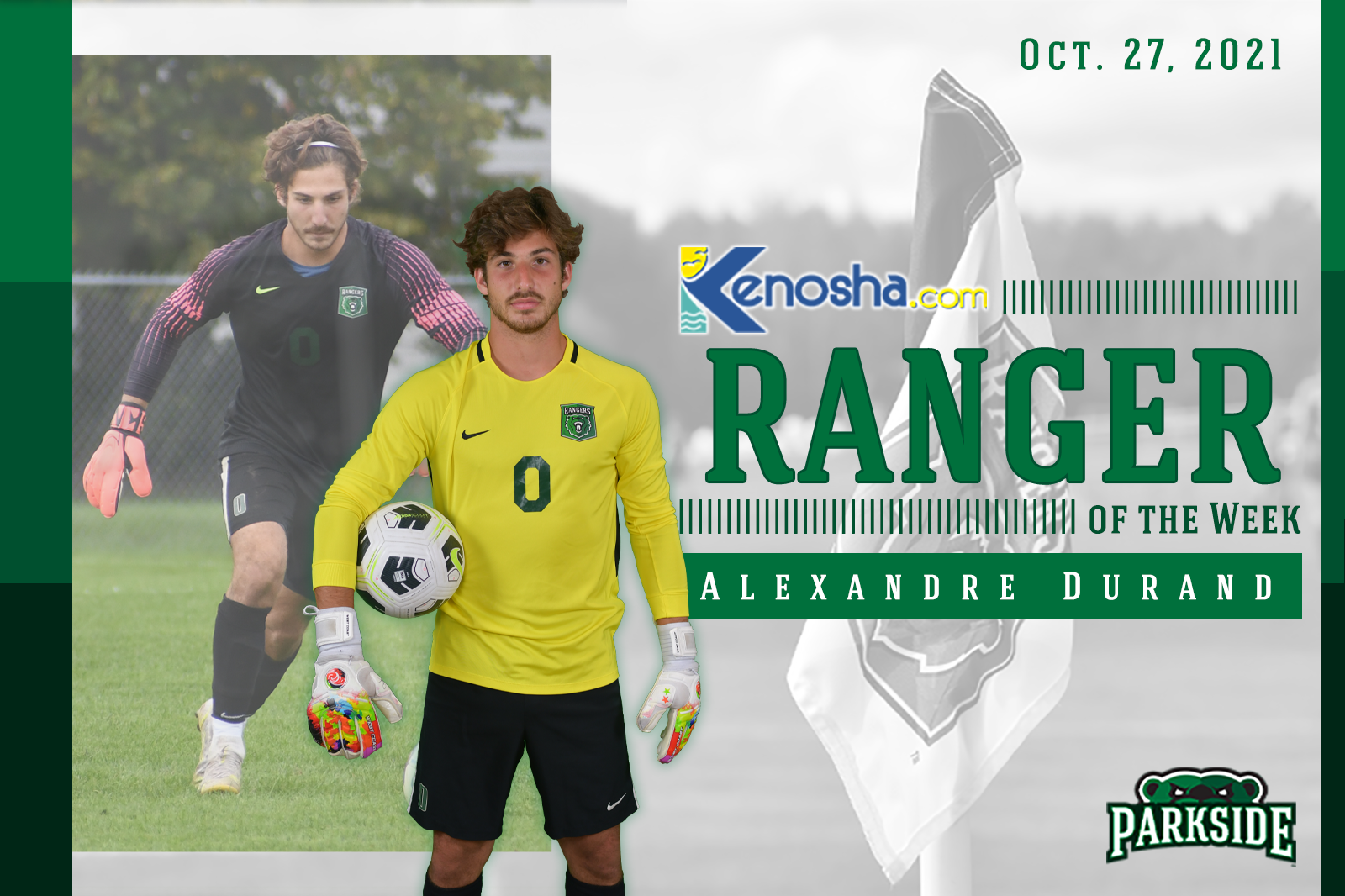 Ranger of the Week: Alexandre Durand

When the bus left campus on Thursday, Oct. 21, the Parkside men’s soccer team had two objectives in mind: Win both of their games on the road, and increase their goal differential as they near the end of the regular season.  Junior goalkeeper Alexandre Durand played a crucial role in accomplishing these goals, and he is our Kenosha.com Ranger of the Week!

Durand, who hails from Paris, France, tallied 12 saves and did not allow a goal over the weekend, earning back-to-back shutout wins for the Rangers against the top two teams in the conference. Durand also recorded an offensive assist during Sunday’s 3-0 victory over Davenport as his clearing attempt took a perfect bounce right to redshirt-junior Rade Novakovich, who scored in the 68th minutes. Durand leads the Great Lakes Intercollegiate Athletic Conference in shutouts (4) and he is second in total saves (44), saves per game (3.14) and fourth in save percentage (0.710).

The Rangers currently sit in second place in the GLIAC, trailing Davenport by a half game. They are eyeing the top spot to earn home field advantage in the GLIAC Tournament.

Durand was introduced to soccer as a young boy growing up in Paris. His grandfather played professionally for Racing Club de France, and his father owns a soccer business called Les Voyages En Ballon. Despite the family background in soccer, Alexandre is the first member of his family to play as a goalkeeper.

“When I was young, I was not the fastest,” Durand said, “so I figured I could be more beneficial as a goalie.”

Durand wears No. 0 for the Rangers. Although there is no sentimental meaning to the number, he enjoys wearing it because it is something that was new to him when he began playing soccer in America.

“In Europe, there is no number zero, it does not exist,” he said. “In the U.S., there’s zero and double-zero. In France, I have never seen number zero, so it’s kind of cool. When I have zero on my jersey, people (back home) are like, ‘What sport do you play?’ and I’m like, ‘It’s still soccer, but different.'”

Durand chose to come to America to have the opportunity to pursue both his soccer career and his academic studies. He is currently studying Business and Marketing at Parkside, but has no plans to use it for a career in soccer. He wants to continue his education and earn an MBA.

Durand has a long-term goal to increase French culture in America. He wants to open up French schools and French bakeries around the country.

Parkside volleyball will hit the road with a match against Purdue Northwest 2 p.m. Saturday (Oct. 30). The Rangers will then return home to face Saginaw Valley State 2 p.m. Sunday (Oct. 31), a match that has been rescheduled from Sept. 25.

Parkside Athletics announced that basketball and wrestling season tickets are on sale, including seats available in The Bear Club and the Nexus Courtside/Matside Club, which both have access to The Bear Club’s bar during events. Be sure to book your spot in the newly renovated De Simone Gymnasium, which features new bleachers and two new video boards. To learn more or to purchase your tickets, visit ParksideRangers.com/Tickets.