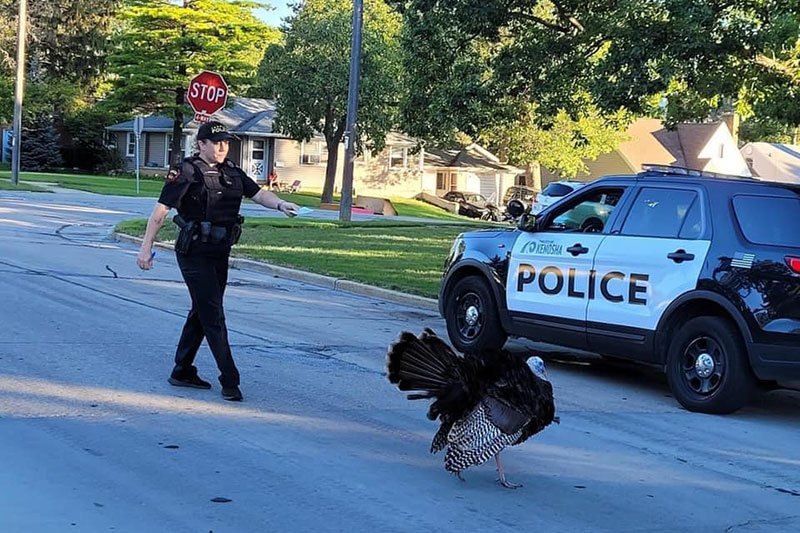 Area residents should respect Carl the Turkey by treating him like the wild animal he is.

That’s according to Kenosha Police officer Shelly Malkmus, one of the city’s humane officers.

Malkmus said “wild animals should be allowed to be wild animals” and is asking residents to please stop feeding him.

“The only way for him to go back to doing his thing is for people to stop feeding him. … The more he gets accustomed to being around people the more he will be in a higher danger area for being attacked by a dog if he lands in somebody’s backyard — my dog would probably attack him if he landed in my backyard — or somebody getting in a car accident with him. Right now, he’s to a point where he’s not showing any fear and is just walking right up and approaching people.”

Malkmus said the only way the city can relocate the wild turkey is if he begins to be aggressive. He’s more curious than anything right now.

The large turkey has been spotted by numerous area residents in the area surrounding Pershing Blvd. The turkey, which residents have named Carl, has a fan following and was recently named the Kenosha.com Kenoshan of the Week. He’s a frequent topic of discussion on local Facebook pages (and even has a page of his own — Carl the Kenosha Turkey) and folks can be seen taking photos of him while on their morning walks or commutes.

“Me and a partner I’ve been working with lately have been driving in the Forest Park area and stopped because we saw Carl in somebody’s backyard,” she said. “He came right up to our truck. We said ‘hi’ to him and after we were driving away, he started chasing after our truck. It was pretty amusing.”

Malkmus said she has no problem with locals snapping a photo or safely driving around the city’s south side to observe him. However, she doesn’t want anyone to harass or chase after the bird.

“If you see him, absolutely pull over safely and take some pictures,” she added. “It’s fun to see wildlife in the city where you don’t commonly see it.”

Still, she worries Carl will lose his wild instincts if he gets too comfortable with being fed by humans.

“Let him get used to foraging for himself,” she said. “If he meets ‘Mrs. Carla’ — the right turkey — and decides he’s going to take off” he would have to learn to survive in the wild without people.

She also reminded locals that it’s a crime to harm any animal, domestic or wild.