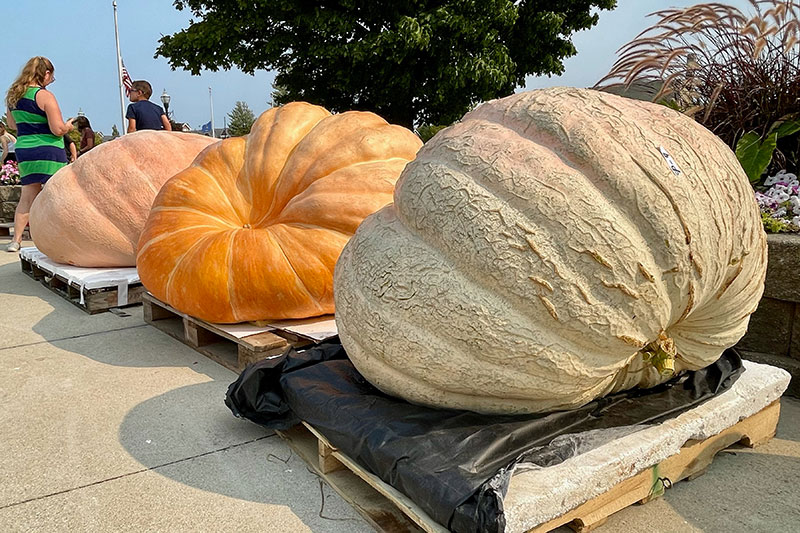 Posing next to a pumpkin the size of a smart car, Caleb Jacobus of Soldiers Grove claimed top honors at the Wisconsin Giant Pumpkin Growers weigh-off on Saturday at Veterans Memorial Park outside City Hall, 625 52nd St.

The contest capped off the City of Kenosha’s ninth Fall Fest, a kid-friendly affair that also featured food and craft vendors and a variety of Kenosha Public Museum activities.

The fun and games ended as the nation’s top pumpkin growers gathered for the results and awards ceremony for the $1,500 top prize.

Jacobus set the state record in 2018 with a 2,283-pound behemoth, the 10th-heaviest pumpkin on record worldwide.

The victory, however, was bittersweet for Jacobus. His newest prize-winner had to be scheduled for weigh-in two weeks early after developing vein problems.

“This pumpkin was over 1,500 pounds at day 50,” Jacobus said. “It would’ve been bigger (than the state record), but that’s pumpkin growing. That’s how it goes.”

Jacobus and Barlow set the world record with a 370-pound bushel gourd recorded at the 2018 Kenosha Fall Fest.

Mathias Willemijns of Belgium holds the world record with a 2,624-pound pumpkin set at the Giant Pumpkin European Championship in Ludwigsburg, Germany, on Oct. 9, 2016.