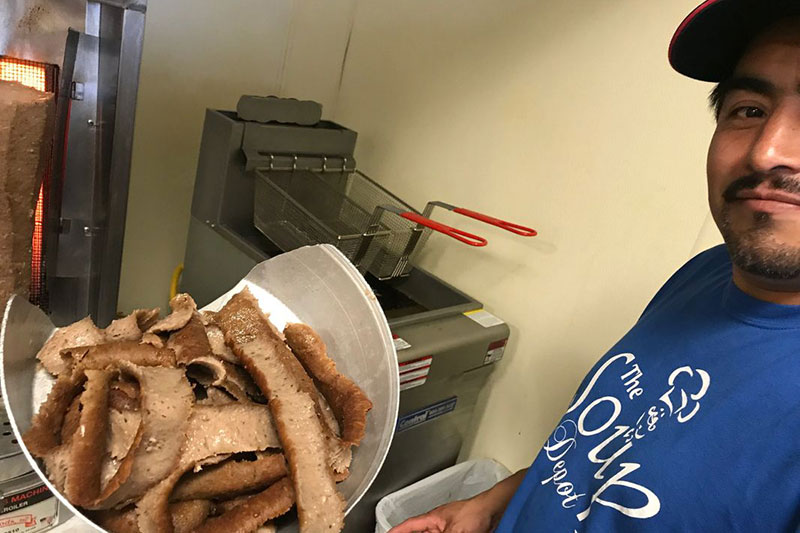 The Soup Depot sells an outstanding gyros sandwich. The meat is on par with the best gyros in town.
PHOTO: SOUP DEPOT
Food + Drink, Business

The hunt for the best gyros in Kenosha

You might have missed it, but National Gyro Day was September 1.

Widely mispronounced, the correct Greek pronunciation of the dish is “yee-rohs,” with “ghee-ros” qualifying as almost acceptable. Please don’t call it “guy-rohs.”

The term gyro denotes a ring, spin or a circle and refers to the rotation of the meat. Greek historians point to the armies of Alexander the Great, who reportedly cooked their meat on long knives, rotating it over an open flame.

The evolution of the sandwich stems from the Turkish döner kebab or the Middle Eastern shawarma. The former originated in the city of Bursa in the 19th Century Ottoman Empire and was made with sliced lamb. A variation of the sandwich, made with sliced pork and tzatziki sauce, found its way to Greece in 1922 or so via Greek or Armenian refugees from Turkey.  Legend has it that the best gyro pit masters were Armenian.

A traditional Greek gyros made with pork is hard to find, although I’ve had an excellent rendition at a place called Loops in Columbus, Ohio. I heard about Loops on “Diners, Drive-Ins and Dives” — it’s special.

According to the “What’s Cooking America” website, the American gyros sandwich supposedly originated at Chicago’s Parkview Restaurant at 2000 W. 19th Street in 1965 before being popularized in Manhattan in the early-1970s.

What spawned the widespread popularity of the sandwich after the mid-1970s actually occurred in Milwaukee.  Margaret Garlic was the wife of John J. Garlic (I’m not making this up), reportedly one of the top Cadillac salesmen in the Midwest. As the story goes, Margaret was watching the television show “What’s My Line?” one day and saw a Greek chef slicing meat off a spit.

Margaret convinced her husband, a Jewish ex-marine, to automate the meat-production process. The couple rented space in a Milwaukee sausage factory in 1973 and launched the nations’ first gyros meat assembly operation.

The process starts with raw beef and lamb trimmings, which are ground with water, bread crumbs oregano and other seasonings. The resulting paste is subject to extreme hydraulic pressure that fuses the meat into cylinders or cones before being flash frozen. Before the process went large scale in the mid-1970s, Greek restaurants often concocted their own version by hand.

Garlic made enough money from the idea to launch an ill-fated Milwaukee restaurant career that began with J.J. Garlic’s at 1100 W. Wells Street in 1976. The Public Natatorium (1979-84) was next at 1646 S. Fourth Street, where he spent $800,000 to renovate the former South Side Natatorium into a restaurant that surrounded a dolphin pool. His last restaurant, located near the University of Wisconsin-Milwaukee, was called Fried Eggs & Tootsies, or F.E.A.T.S.

Enough history already. What about the sandwich, and when do we eat? Or as Frank Zappa and the Mothers of Invention drummer Jimmy Carl Black once asked, “Where’s the beer, and when do we get paid?”

The cones are cooked on a rotating electric spit. The sandwich maker slices off strips of meat, which leads to the inner portion being next in line for crisping. Lightly-oiled pita bread is heated on the grill or flattop, the meat is laid on the pita and topped with sliced tomatoes, onion (red onion works better, by the way) and tzatziki sauce. The latter is salted yogurt, usually mixed with cucumbers, garlic and herbs, such as dill.

One day in late-August, I assembled a couple of basketball legends/fast-food aficionados to help me sort through Kenosha’s versions of this legendary sandwich. Former Carthage College men’s basketball coach Bosko Djurickovic and his son, Steve, the current head coach for the team formerly known as the Redmen, were both eager participants, as was Lisa Waltz, Steve’s fiancé and the current Alverno College women’s soccer coach.

Gyros seems to be a sidelight at this well-known downtown hot dog stand. The meat came in small pieces and clearly not off a spit (nor was a spit visible). It just didn’t have that great, spit-roasted flavor and texture that makes a great gyros, nor was it presented in beautiful slices or chunks. They also lost presentation points for using chopped onion, instead of the more-traditional sliced onion. The pita was sort of pedestrian.

We think that Marina Gardens uses a different vendor for their meat, because it lacked the garlic and herb bite that we had gotten used to. In a word, the meat was sort of bland. The presentation missed the mark, because the onion and tomato was buried below the meat, which ultimately sogged out both garnishes. The pita was sort of bland and pillowy.

Phoenix got perfect scores for presentation and meat. The pita was too soft and not grilled, and the tomato was not particularly attractive.

The Gyro Grill’s meat, while good, was sliced a little thin and lacked the crispy edges that we all like. The presentation and the garnishes were fine, especially the red onion, but the pita was sort of ordinary-tasting. Gyro Grill, which claims to serve 1,500 pounds a week of gyros, deserves some credit for transitioning from packaged gyros meat to a spit a few years ago.

Both El Fuego Gyros and the Gateway Café offer perfectly-executed gyros sandwiches. El Fuego, as with Gateway below, is a flawless rendition. The meat at El Fuego is delicious, the pita is warm with char marks from the flat top, and the garnishes are all top-notch. This gyros is one of my Kenosha favorites, and we sometimes order the meat by the pound, which they sell with all the garnishes and some extra pita. I like the red onions that Gateway uses more than the typical white onions, but I wouldn’t mark anyone down for that. I do wish that every shop would consider buying local tomatoes for the two months or so that you can get them. A better tomato would elevate every sandwich on this list.

Gateway has an excellent gyros sandwich. My panel could find no fault with this effort. The presentation was fine, the meat, like most we tasted, was top-notch, and the garnishes were all excellent, particularly the red onion. Well done, Gateway Café.

The Soup Depot sells an outstanding gyros sandwich. The meat was excellent and on par with the best gyros in town. The presentation, the pita and the garnishes were fine, with a few extra points awarded for their wonderful tzatziki sauce, which had slightly-more assertive seasoning than the others, mostly from extra dill. The tomato garnish could have cut a little more artfully, but we quibble. In the final analysis, the small amount of extra dill used by the Soup Depot in their tzatziki sauce provided the only daylight between their sandwich and the tied entries from El Fuego and Gateway.