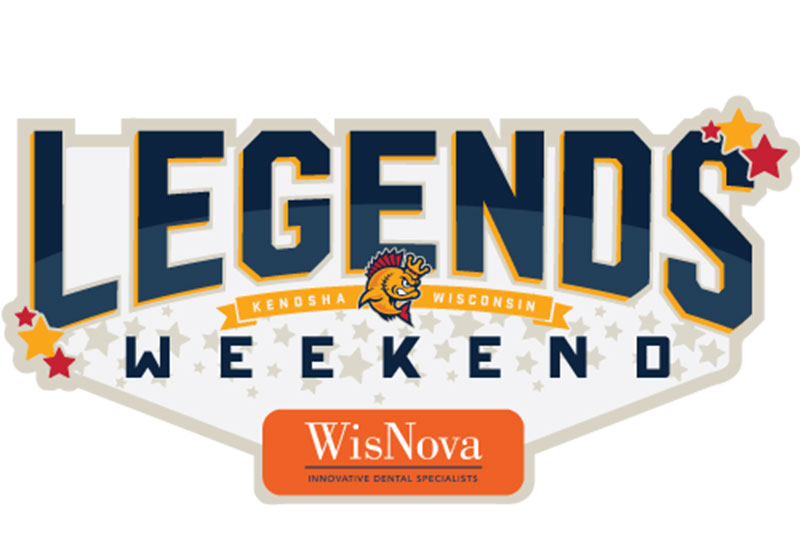 Home Run Derby at the Harbor to kick off the festivities

The Kenosha Kingfish are bringing back one of the most memorable events in Northwoods League history — complete with a star-studded cast — to the Kenosha lakefront next weekend.

The Derby kicks off the first-ever Legends Weekend for the Kingfish. The two-day event culminates with a Celebrity Softball Game on Saturday, Aug. 28 at Simmons Field.

Tickets are still available at KenoshaKingfish.com.

Here is a closer look at the event’s special guests:

Montee Ball: A running back, Ball finished his career at Wisconsin in 2012 with an NCAA record 83 touchdowns. … The Missouri native finished fourth in the Heisman Trophy voting as a junior after he set the Big Ten/NCAA record with 39 touchdowns in 2011. … Drafted by Denver in the second round (56th overall choice) in the 2013 draft and played two years for the Broncos.

Willie Banks: Right-hander pitched for the Kenosha Twins of the Class-A Midwest League in 1988 after being taken by Minnesota with the third overall pick of the 1986 draft behind Ken Griffey Jr. (Mariners) and Mark Merchant (Pirates). … A product of St. Anthony’s High School in Jersey City, N.J., the same school where Bobby and Danny Hurley played basketball for their dad, Bob Hurley. … Went 10-10 with a 3.72 ERA and 113 strikeouts in 125.2 innings in 24 games (all starts) under rookie manager Ron Gardenhire for the 1988 K-Twins. … Made his big-league debut with two innings of relief (two unearned runs) for Minnesota in Yankee Stadium on July 31, 1991. … Best game was a four-hit shutout of the host Los Angeles Dodgers for the Cubs on May 24, 1994. … Went 33-39 with a 4.75 ERA in nine seasons for the Twins, Cubs, Dodgers, Marlins, Yankees, Diamondbacks and Red Sox between 1991 and  1995 and from 1997 to 2002.

Rollie Fingers: Hall-of-Famer established himself as one of the greatest relievers of all-time by saving 341 games for the A’s, Padres and Brewers between 1968 and 1985. … Anchored the A’s’ bullpens for their 1972, 1973 and 1974 World Series championship teams. … Saved two games and won one in being voted MVP of the 1974 World Series. … American League Cy Young and MVP winner for the 1981 Brewers. … Member of the Brewers’ 1982 pennant winner but did not pitch in the postseason because of injury. … His No. 34 is retired by the Brewers. … Seven-time All-Star and four-time Reliever of the Year winner. … Hit two homers, the last of which came off Kenosha native Dick Bosman on June 27, 1972.

Bill Hall: Infielder-outfielder hit .253 with 102 homers and 367 RBI in an 11-year big league career which started with the Brewers in 2002. … His most memorable moment with the Brewers was a walk-off home run on Mother’s Day 2006 with his mom in attendance at Miller Park. … Hit a career-high 35 home runs for the Brewers in 2006, which was the ninth-highest total in team history at the time. … Hit .250 (2-for-8) with a walk in the Brewers’ loss to the Phillies in the 2008 National League Division Series. … Also played for the Mariners, Red Sox, Astros, Giants and Orioles.

Mike McKenzie: Defensive back played for the Green Bay Packers from 1999 to 2004 after being drafted in the third round by the team out of Memphis. … Played 70 games and recorded 15 interceptions, one fumble recovery and one sack for the Packers. … A 90-yard interception return for a touchdown on Dec. 7, 2003 against the Bears’ Kordell Stewart is tied for the fifth-longest in Packers’ history. … Finished his career with six seasons in New Orleans. While he was no longer on the roster when the Saints won their only Super Bowl, the team gave him a ring for his contributions in 2009, which included five games (two starts), 11 tackles and an interception.

Paul Molitor: First ballot Hall-of-Famer recorded 3,319 hits as part of a 21-year career which included three 200-hit seasons, a World Series MVP Award for the 1993 Blue Jays, seven All-Star berths and four Silver Slugger Awards. … His No. 4 is retired by the Brewers. … Joins Ty Cobb, Honus Wagner, Eddie Collins and Ichiro Suzuki as the only players with 3,000 hits and a .300 average. He is the only player to do that with 200 home runs. … Hit .355 with three RBI, including a 5-hit effort in the opening contest, for the Brewers in the 1982 World Series. … Captivated the nation with his 39-game hitting streak for the 1987 Brewers. The streak stands as the fifth-longest in baseball history. … Only player in history to record his 3,000th hit via a triple. … Managed his hometown Minnesota Twins from 2015 to 2018, earning the American League’s Manager of the Year Award in 2017.

Jamie Ogden: First baseman-outfielder was the Minnesota Twins’ third round pick in the June 1990 draft out of White Bear Lake (Minn.) High School. … Spent his third professional season in 1992 in Kenosha with the Twins of the Class-A Midwest League. … Playing for manager Jim Dwyer, the lefty hit .245 with three home runs and 51 RBI in the franchise’s final season in Kenosha. … Played professionally through 1998, playing his final three seasons for Triple-A Salt Lake of the Pacific Coast League.