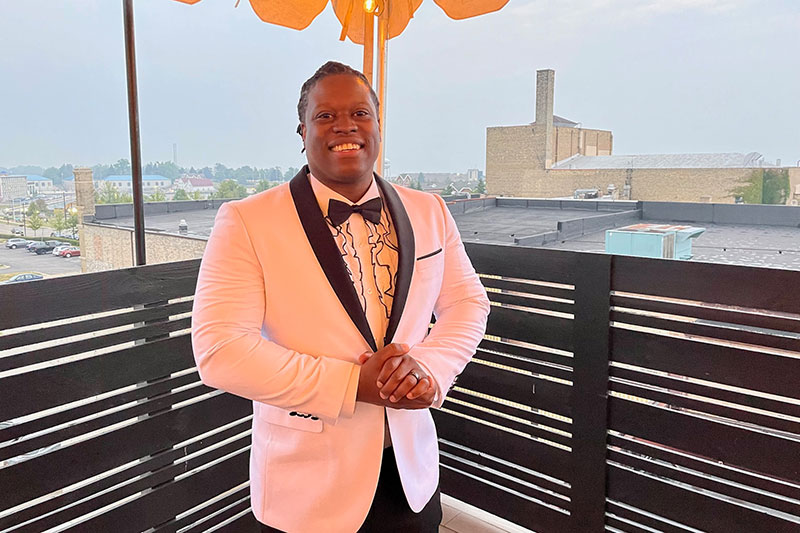 The black tie event was held on the rooftop of The Apis Hotel & Restaurant, 614 56th St.

The newly formed organization aims to be a social club similar to the Swedish-Amercian Club and Italian-American Club in Kenosha. It will also serve as a support network for Black residents and foster business development for this community.

“During a time of racial unrest and cultural divisiveness, it is more important than ever to have a place to go to feel connected. Connected to one another, to a culture, an identity and to foster a sense of community,” the organization’s mission statement reads. “Unfortunately, there are few places for African Americans to do this in Kenosha, (Wis.).”

“The African American Club has been in my brain for eight years,” West said Saturday night. “I’ve been fortunate to serve the city as a police officer and as a civilian. I’ve got to see the different vantage points of different people.”

West grew up on the city’s south side. He wants the organization to help Black residents reach their full potential and inspire young people.

“You know how ambitious I want to be? Black Wall Street,” he said, referring to Greenwood, Tulsa, Okla. About 100 years ago, Greenwood was one of the most affluent majority African American communities in the nation.

The U.S. recently marked the 100th anniversary of the Tulsa race massacre. Between May 31 and June 1, 1921, mobs of white residents attacked  Black residents, killed many and burned businesses in the area’s Greenwood District to dust.

The local gala was attended by community activists, area entrepreneurs and locally elected politicians, among many others.

Alvin D. Owens, community engagement director for the club, told the crowd change is coming. He said all are welcome here.

“This is just the beginning,” he said. “You don’t understand what’s about to happen to Kenosha. … It is the start of something outstanding, something beautiful. We are making history.”

“I think it’s really spectacular what West and the team are endeavoring to do. He really has associated this with Black Wall Street in Tulsa. If you know anything about the history of Black Wall Street it was a community built by African Americans. At the time it was the most affluent and fiscally progressive African American community in the country. Unfortunately, it was destroyed due to racism.”

The Rev. Lawrence Kirby, pastor of The Acts Church of Kenosha, opened the dinner with a prayer.

“God, we ask you to use us to change this city,” he said. “We pray that you would use us and that we would lift up this community. … Lead us tonight as we carry on the fight of our forefathers and ancestors. God, we give you glory and we honor you. We thank you. Let it be.”