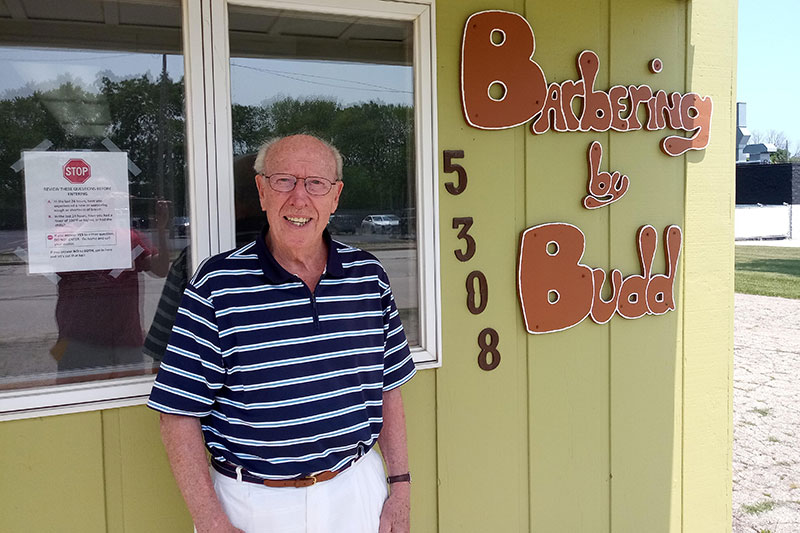 Kenoshan of the Week: Budd Denig

Ninety-year-old barber has been cutting hair since 1954

On a recent Saturday morning, Francis “Budd” Denig could have been at home relaxing in his recliner and watching the British Open from Royal St. George’s Golf Course on television.

Heck, he could have taken advantage of the pleasant, sunny day himself by playing nine holes at Brighton Dale or Petrifying Springs.

Instead, he was armed with a pair of scissors and clippers and engaging customers just like he has always done for the last 60-plus years.

“I feel good,” Denig said after cutting the hair of Alex Spinner, a first-time customer.

When asked why he continues cutting hair in his 90s, Denig smiled.

“He said, ‘Shorten your hours, but don’t quit,’” Denig said. “He’s one of the best doctors in the city. So, I listened.

“I could’ve sold this place I don’t known how many times, but I said, ‘Where am I going to go?’”

Married to the equally charming Connie, they live in a house located next door behind the shop. The couple, who celebrated their 68th wedding anniversary July 11, have three children and four grandchildren.

A grandson, Michael D’Olivo, who lives in Portland, Ore., recently tweeted about his amazing grandfather and included pictures of the barbershop. “If you live near Kenosha, WI and need a cut … drop by to see Budd,” he tweeted.

Budd and Connie got a kick out of that.

“He’s trying to keep me busy,” Denig joked. “He must not want me to retire.”

We don’t either. The tireless and sprightly barber has been selected as the Kenosha.com Kenoshan of the Week.

Denig turned to barbering shortly after returning from the Korean War. He served in the U.S. Naval Reserves before serving active duty in Naval aviation.

Prior to joining the service, Denig worked at Simmons Manufacturing Co. Once he returned, he got a job at Johns-Manville Corp. in Waukegan, Ill.

“It was sort of a crummy job,” he said. “I told them I was going to leave. When asked why, I said, ‘I’m going to barber school!’ The guy said, ‘Is your dad or uncle a barber?’ I said, ‘No, but anything would be better than here.’”

So, Budd went to barber school in Chicago.

“There were maybe eight or nine of us from town because factories were closing and everybody was looking for something to do,” he said. “I considered school out of the service. I never really took advantage of the GI Bill, except I got credit from the barber school. I just stayed with it.”

Denig’s first foray in barbering was at a long-gone shop, which was located across from Tenuta’s Deli. He then worked for Community Barbershop, which had three shops around town.

After the previous owner of the building died, Denig rented for nine years before purchasing the shop and the house next door.

Prior to the quaint building serving as a barbershop, it is believed that it was an A&W Restaurant and then became a sit-down restaurant at one time.

Initially, Denig had other ideas when he took over the building.

“I was going to turn this into a Boy Blue,” he said, referring to the one-time popular ice cream franchise. “I thought, if worse came to worse I could still cut hair, but that fell through.”