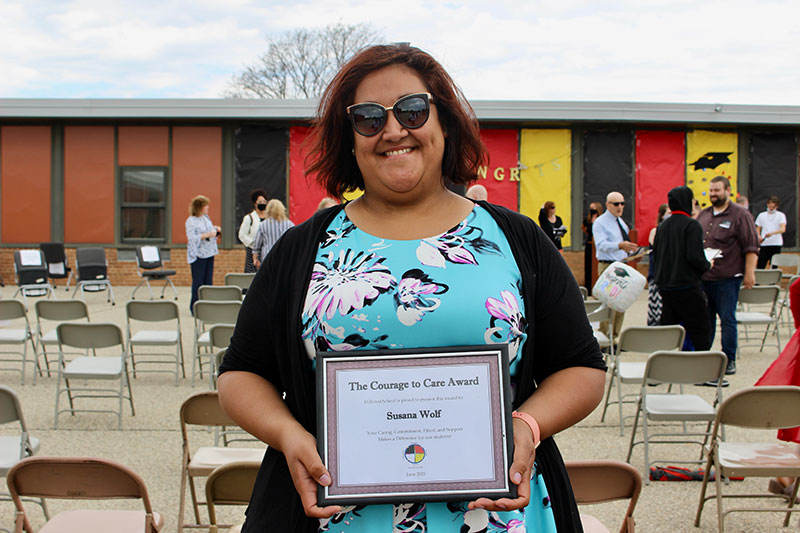 Kenosha County Youth Justice Worker Susana Wolf attended last week’s awards and commencement ceremony at Hillcrest School, planning only to celebrate the accomplishments of some of the students she’s helped to move onto the right path in life.

She didn’t realize that she’d be leaving with the school’s Courage to Care Award, an honor that caught her by surprise when it was presented early on in the program.

In presenting the award to Wolf, School Social Worker Melissa Szejna said that in this year of changes, challenges and adversity, Wolf’s name was the one that continued to stand out above the rest in discussions about whom to honor in 2021.

“Those who know Susy know that she has this amazing ability to be personable with everyone,” Szejna said in her speech during the awards ceremony. “She has great relationships with her clients and families, to the extent that they want to call Susy for advice, words of encouragement or just someone they can lean on.”

Hillcrest is a Kenosha Unified School District school that offers programs for middle and high school students who have experienced difficulties in traditional settings.

Szejna said Wolf supports and advocates on behalf of students’ mental wellness and is readily available and always willing to come to the school to provide support when needed.

“Susy comes into Hillcrest School with smiles and greets everyone with a welcoming attitude,” Szejna said. “She has the ability to take any situation and find positives and teachable moments in any situation that she encounters.”

Now in her third year with the Kenosha County Division of Children and Family Services’ Youth Justice Unit and a veteran of more than 15 years in the field, Wolf has clients in schools across the county but is well known at Hillcrest, where she will often respond quickly if she learns that a youth on her case list is having difficulties.

Wolf said her aim is to try to remind students that their success is for them, and nobody else. She said the most satisfying part of the job is seeing students graduate and gain employment.

“I do love my job and I love working with my clients,” Wolf said. “For me, they’re more than clients. I just hope to be that 1 percent of their success.”

Of earning the Courage to Care award, Wolf said, “It was a total surprise. It was an honor.”

“Susana Wolf exemplifies the care and compassion that the Kenosha County Youth Justice Unit has for the youth and families they work with every day,” Rhodes said.