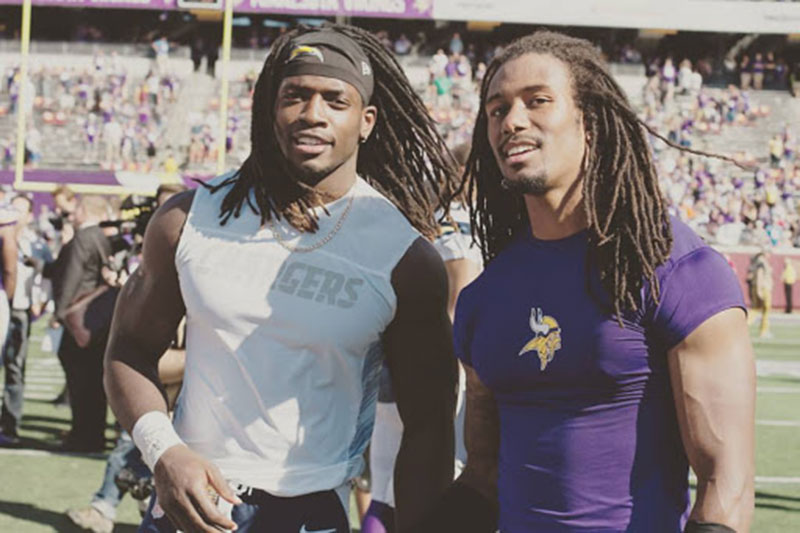 Longtime friends Melvin Gordon and Trae Waynes meet up on the field after an NFL game.
Kenoshans, Local, Sports

This Date in Kenosha Sports History: Dynamic duo selected in first round of NFL Draft

Happy sixth anniversary to the most remarkable single day in the history of Kenosha sports.

Heck, maybe even the city in general.

OK, that may be going a bit far, but on this date (April 30) in 2015 Kenosha was part of a National Football League draft rarity when Bradford High School teammates Melvin Gordon and Trae Waynes were selected in the first round.

Waynes, a cornerback out of Michigan State, went 11th overall to the Minnesota Vikings while Gordon, a running back from Wisconsin, was taken four slots later by the San Diego Chargers.

The longtime friends had their names called by NFL Commissioner Roger Goodell at the Auditorium Theatre in Chicago. As they walked across the stage, they were cheered wildly by family, friends and fans who were on hand to witness the event.

This marked just the fifth time since 1990 that high school teammates were selected in the draft’s first round. It was also the first time in the draft’s 80 years that this happened to players from the Big Ten Conference.

The other teammates were from prep football-crazed states like California, Georgia and Florida, not Wisconsin where first-round picks are a rarity.

The magnitude of the moment was not lost on Gordon.

“The question to be answered today is, ‘What’s your favorite draft day memory?’ Being drafted the same day as my best friend Trae Waynes,” Gordon said in a 2020 article on 247Sports.com. “We pretty much did the whole process together. I remember being sophomores in high school, sitting on the bus next to each other and just wishing and dreaming — just trying to get a scholarship.

“Obviously, we have different paths, but it all led us to that night on draft day. I remember watching him go across the stage and just cheering him on and being happy for him as the 11th pick. And then shortly after, four picks later, I went. And man, I just loved every second of it.”

“Surreal. This is something I dreamed about as a kid. The fact that it’s actually happening — I don’t even believe it yet. Once I got that call, I was like, ‘Are they really calling me?’ But you know, it’s a dream come true …,” Waynes told FOX6 Milwaukee.

While Gordon was the more decorated and publicized of the two in college, Waynes’ draft stock soared after his eye-popping performance at the pre-draft NFL combine.

Gordon harbored no jealousy or resentment or bitterness over the fact that Waynes was picked first.

“It was just good to have him there as a friend — as a guy who’s going through this, as everything,” Gordon told FOX. “He’s been there for me. When I was getting off stage, he’s right there waiting for me. It wouldn’t have been no different if I went before him.”

Prior to 2015, the last Kenoshan taken in the NFL draft was St. Joseph graduate Tom Regner in 1967. A guard out of Notre Dame, Regner was taken by the Houston Oilers in the first round (23rd overall pick) and went on to have a productive six-year career.

The only Kenoshan taken higher than Waynes at No. 11 was the great Alan “The Horse” Ameche, who was the third overall pick of the 1955 draft by the Baltimore Colts.

A shoulder injury cost Waynes the 2020 season but he said in a recent Bengals.com article, “I’m fine. I’m not limited in any way. I’ve been doing basically everything I’m able to do,” Waynes reported from his offseason this week. “I would say 100 percent. I feel fine.”

Gordon is entering his second season with the Denver Broncos after five with the Chargers. A Pro Bowl pick in 2016 and 2018, Gordon rushed for a career-best 1,105 yards in 2017.