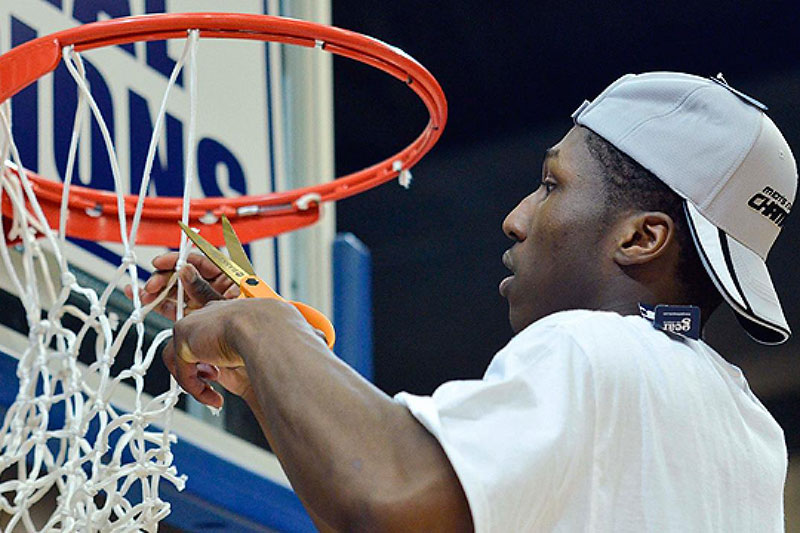 This Date in Kenosha Sports History: Game-winner in Salem

On this date (March 22) in 2014, Kenosha’s Quardell Young scored the most important basket in the esteemed history of the UW-Whitewater men’s basketball program.

The Bradford graduate hit the go-ahead layup with under one second left to give the Warhawks a thrilling 75-73 victory over Williams (Mass.) in the NCAA Division III championship game in Salem, Va.

“It’s an amazing feeling,” Young said in the press conference following the game. “It feels like I haven’t done anything but realistically it was a huge play.”

UW-Whitewater fell behind 72-71 with four seconds left after a Williams rebound basket.

Young took the inbounds pass about 30 feet from the baseline and began his dash down the left side with the 2,681 fans at the Salem Civic Center going berserk.

The left-handed Young picked up his dribble after four bounces. By that time, the junior guard had slithered through three defenders in the lane and went airborne with a left-handed shot about four feet from the basket. Young sent the ball to the hoop as he was being fouled. With Young falling to the court, the ball dropped through the basket, giving the Warhawks the lead (https://youtu.be/w6ZOoPvemHY).

“The shot was huge for me,” Young said recently. “It all still seems like a blur today, but clearly it was an aggressive play at the most critical point of the game made off of pure adrenaline.”

Despite having two timeouts, there was no hesitation on Whitewater’s part after Williams had taken its last lead.

“We do a lot of that in practice — late game situations — but I felt it was enough time for us to get up and down the floor,” Young said after the game. “They were set in their zone defense before. When they made the tip-in, they were scrambling. The floor was spaced and we were able to get off a surprise play.”

The fact that Whitewater did not use a timeout in that situation was not a surprise to Young.

“I’m just … thankful that coach Pat Miller vowed to never call a timeout in those situations to allow a team to set their defense,” Young said recently.

Young, who made the all-tournament team, converted the free throw for the last of his 13 points in the nationally-televised contest. When Williams missed a desperation half court heave at the horn, Young had his second national championship in three seasons at the school and the Warhawks had title No. 4 overall.

“I don’t think you can ask for anything better at our level to have our national championship come down to a finish like that,” said Whitewater coach Pat Miller, whose team finished 29-4.

The championship was part of a first-of-its kind accomplishment. Whitewater also won the football and baseball titles that year becoming the first school to do that.

“It won us our second national championship in three years and I can only be grateful for the group of guys that I was able to compete with throughout my time there,” Young said. “(I am) also extremely thankful for the university that I share it with.

“History can never be erased!”

The incredible shot was part of a decorated career for Young as the school.

He capped his four-year career by earning first-team All-America honors from three organizations while also receiving district, region and conference player of the honors.

Without stretching the bounds of credibility too much, it’s safe to say that this was the most important shot ever made by a Kenosha product.

*Chris Trottier’s off-balanced 25-footer as time expired to give undefeated Wilmot to a 56-54 win over Kimberly in a WIAA Class B State Tournament semifinal on March 15, 1991 in Madison. Wilmot won the title the next day. https://youtu.be/KNDM7AkWMUU

*Nick Van Exel’s turnaround buzzer-beating 3-pointer on Jan. 21, 1995 which gave the Los Angeles Lakers a 120-118 win over the Boston Celtics in the final game at the Boston Garden between the storied rivals. https://youtu.be/pV1YZoUGO7c

Have any other suggestions?

E-mail them to me at Dmarran359@aol.com