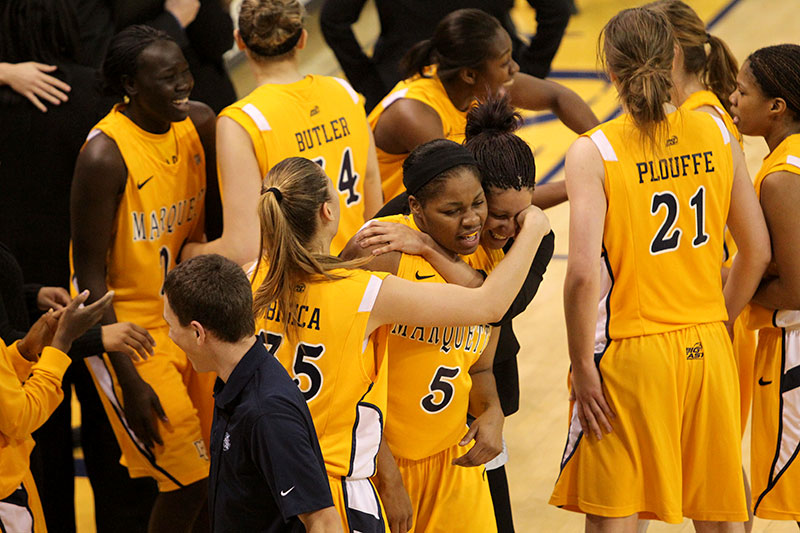 Bradford graduate Katie Young is surrounded by teammates after delivering one of the most dramatic shots in Marquette women’s basketball history against Villanova on Jan. 10, 2012 at the Al McGuire Center in Milwaukee.
PHOTOS: MARQUETTE ATHLETICS
Sports

On this date (Jan. 10) in 2012, Kenosha’s Katie Young thrust herself into the national spotlight as a member of the Marquette women’s basketball team.

The Bradford graduate drained a 40-foot shot as time expired to lift Marquette to a 51-50 win over Big East rival Villanova at the Al McGuire Center in Milwaukee.

So dramatic was the successful 3-pointer it was the top play on ESPN’s SportsCenter that night.

With Marquette trailing by two, Villanova missed a free throw with 3.6 seconds to go.

One pass put the ball in Young’s hands and, after one dribble, the sophomore guard let loose with a heave that exited her right hand with 0.9 seconds left.

The horn sounded as the arcing attempt was about halfway finished with its journey. The ball dropped through the net in front of the Marquette bench, which exploded with joy with players spilling onto the floor.

Meanwhile, a jubilant Young sprinted toward the opposite corner of the court as her giddy teammates chased her down.

“Katie Young!” Everett exclaimed as the highlight of the shot was playing. “Forever Young! Buzzer beater! Marquette wins by one. That’s your top play.”

Young finished with eight points in 17 minutes off the bench as Marquette improved to 11-6 and 2-2 in the Big East.