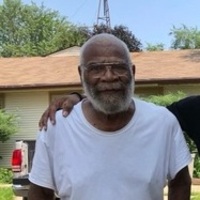 Willie L. Pippen Jr, 82, transitioned from this life on Monday, May 31, 2021 at his home surrounded by his loving family.

Willie was born on July 26, 1938 in Gadsden, AL, the son of the late Willie and Adell (Wright) Pippen Sr.  He was educated in the schools of Detroit, MI.  Willie married Lula Brown on July 26, 1982 in Kenosha; they later divorced.  Willie was a self employed contractor for more than 50 years, operating Pippen Home Improvements.  His hobbies included carpentry, cooking, fishing, doing puzzles, but most of all spending time with his family & friends.  Survivors include his children, Anthony Brown, Kenyetta Brown-Harris both of Arkansas, Adenika Pippen of Skokie, Chiwale Pippen of Kenosha; sister, Cleo Owens of Kenosha; 10 grandchildren; and 3 great grandchildren; Willie was preceded in death by his brothers, Bob, John, and Charles, and sisters, Katherine, Freddie, Lois, and Gloria.

A memorial service to be announced by the family at a later date. The family wishes to thank all those who’ve reached out during this time of tremendous loss.