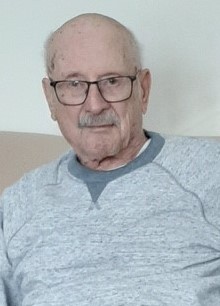 Born in Kenosha on September 23, 1922, he was the son of the late Fred and Helen (Blasi) Powers Zierk.  He attended schools in Kenosha.

William entered the Army Reserve Calvary in 1938 and enlisted in the Army in 1939 at the age of sixteen.  He served in the 105th Horse Calvary with the 32nd Infantry Division.  William served overseas in North Africa and Europe.  He was decorated for Heroism in the Poe valley in Italy and received many medals.

Bill was employed by the city of Kenosha Police Department for 27 years and retired as a Detective in 1982.  He enjoyed hunting, fishing and traveling with his wife to Europe, all the States and Canada.  He also played semi pro football for the Kenosha Redskins and basketball and baseball for different leagues in the city.

In addition to his parents, William was preceded in death by his wife Lorraine.

The family would like to extend a special thank you to Lisa, Elaine and Connor for the compassionate, kind, and loving care and helping us keep William wishes to keep him at home.