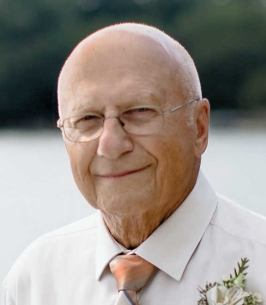 Bill was born in Kenosha on March 6, 1937, to the late William E. and Ann (Dumesic) Marescalco. He graduated from Mary D. Bradford High School in 1954, enlisted in the Marines at age 17, and was the Honor Cadet of his platoon. He was stationed in Japan for a year and honorably discharged in 1957. Later that year, Bill began his career in land surveying, which he would enjoy for over five decades working in the Kenosha County Surveyor’s Office and later with his son, Glen, at Marescalco Countywide Surveying.

Perhaps Bill’s best-known legacy is owning and operating Sheridan Lanes bowling center from 1973 to 2012 and Sheridan Self Storage from 1996 to 2021 with his wife, Barb. Bill loved the game of bowling but treasured even more the relationships developed through the sport as a teammate, coach, and friend. His bowling accomplishments include thirteen 300 games, nine 800 series, 49 appearances and three titles in the Kenosha News tournament, coaching the Tremper High School boys bowling team to three state titles, and joining his dad, Bill Sr., in both the Kenosha and Wisconsin State Bowling Hall of Fames. Over the years, Bill competed in various leagues and tournaments with his dad, brother, kids, grandkids, and nephews. He bowled his final league season on a team with Barb and threw his last ball (we’ll call it a strike) just four weeks before his death.

Bill’s family legacy, however, has always been the cottage he purchased with Barb in 1976. Their summer escape just 45 minutes out of town became a treasured place for family to gather and backdrop to a lifetime of memories: birthday parties, boat rides, cornhole tournaments, euchre games, hundreds of puzzles, and one memorable wedding. What was at first the source of endless improvement projects, eventually became his dream home, his “love boat,” and the site of many golden retirement years.

Bill built a life he was proud of and exemplified hard work, determination, fun, and occasional hard-headedness. He loved to “put something together:” a ball team, a bowling league, a new business idea. He built anything his kids and grandkids dreamed up: a tree house, a playhouse, a fort, an ice-skating rink. On holidays, Bill would gather his nieces, nephews, and grandkids under the dining room table and tell “Jack stories,” tall tales of missions with his imaginary best friend (a dog), Jack. He was also known to pull over next to a farm field and “call the cows,” which would all come running much to his kids’ delight and his own amusement. A steadfast (read: frustrated) Cubs fan for over 70 years, you could frequently hear “Cubs lose, Cubs lose!” hollered from somewhere in the house, with only a brief respite in the fall of 2016.

In addition to bowling, Bill enjoyed golf and had a lifetime love of baseball, from pick-up games at Roosevelt Park as a kid to organizing the Kenosha Blue Streaks summer team for his friends and playing slow pitch softball well into his 50s. He also adopted new hobbies later in life. At age 78, Bill trained for and ran his first 5K – a family affair – and proudly earned a medal for his age group. He enjoyed many subsequent Turkey Trots with his cherished family in North Carolina.

Bill was kind and generous to all, quick to say, “I love you,” and able to find the bright side of any challenge. When asked how he was doing, his customary response was, “Never better.” This mindset helped him overcome many challenges later in life and we know that he would assure us that he’s “never better” as we celebrate his life today.

The family would like to thank Dr. Neil Shepler and Hospice Alliance House for their compassion and support.

Visitation will be held at Proko Funeral Home on Monday, April 25, 2022, from 4:00-6:00 p.m., followed by a brief service at 6:00 p.m. with military honors. Family and friends are invited to Sheridan Lanes for a gathering immediately following the service. Interment will be held privately. In lieu of flowers, donations may be made to the Hospice Alliance House. All donations to the family will be directed to support the Tremper High School bowling teams.