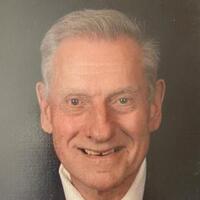 His hobbies included drinking coffee in the morning while reading the newspaper, watching old western movies, yard work, camping, racing, spending time with his pet Roxy, was a fan of the Milwaukee Brewers, Green Bay Packers, Wisconsin Badgers but most of all he loved spending time with his friends and family, especially his granddaughter.

Ward is survived by his daughters, Sandra and Brenda; son-in-law, Jeff; granddaughter, Charde; brothers, Ernest and James.  Ward is preceded in death by his wife, Roberta of 64 years; brothers Gerald and Robert.

A visitation will be held on Friday December 3, 2021, at Kenosha Funeral Services from 9:00AM-11:00AM with Minister service and Masonic funeral services to follow immediately at 11:00AM. Private interment.

In lieu of flowers, memorials to the family, Friendly Center and St. Mary’s Lutheran Church would be greatly appreciated.