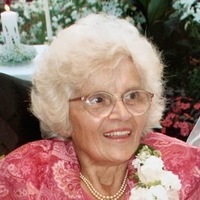 Virginia Kreuscher age 94, of Kenosha passed away on Friday March 18, 2022, at Brookside Care Center with son Jay at her side.

Virginia was born on October 25, 1927, in Kenosha, the daughter of the late Joseph and Margaret (Kramer) Giorno. She was educated at Saint George elementary school and Mary D Bradford high school of Kenosha. Virginia married Jerome Kreuscher on October 15, 1949, at St. George Catholic Church in Kenosha. Her hobbies included sewing, crafts, cooking, baking, growing flowers, making her special pizza, but most of all she loved spending time with her friends and family, especially her grandchildren.

Virginia was preceded in death by her parents; husband Jerome Kreuscher, 2 brothers John Giorno & Joseph Giorno Jr. and her youngest son Christopher. Christopher had multiple disabilities and special needs throughout his life. She was completely devoted to him, caring for him in the way only someone as loving and selfless as she was could.

The family would like to thank the staff of Brookside Care Center, the 400 hall, for the very special care they provided over the past 4 years, also the staff of Kenosha Hospice Alliance.

A visitation will be held at St. Elizabeth Catholic Church in Kenosha on Saturday April 2, 2022, from 1:00PM-2:00PM with funeral services to follow immediately at 2:00PM and burial at St. George Cemetery, Kenosha, WI.

In lieu of flowers, memorial donations to St. Jude Children’s Research Hospital, stjude.org would be appreciated.