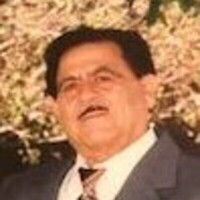 Born on May 30, 1927, in San Augustin de Melilla Nieves, Zacatecas, Mexico, he was the son of the late Julian Neave Ceniceros and Dolores Sanchez Aguilar.

On March 7, 1949, in San Augustin de Melilla Nieves, Zacatecas, Mexico, he was married to Alejandrina Tonche de la Rosa. In 1987 they moved to Kenosha to be with their family. They shared a long and happy life, and remain married for 60 years, until her death in September 2009.

In addition to his parents, he was preceded in death by three brothers, Jacobo, Arturo and Alfredo, and on sister Eloisa.

A visitation will be held at Kenosha Funeral services on Monday December 13, 2021, from 10:00AM-11:00AM with funeral services to follow at 11:00AM. Interment will be at St. James Cemetery.