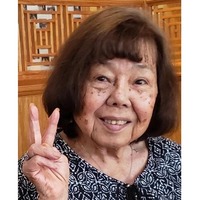 Takeko Hotchkiss 82, of Kenosha passed away on June 2, 2022, at Vista Medical Center in Waukegan, IL. At her side was her daughter Rika and son in law Jerry.

Takeko was born on July 14, 1939, in Okinawa Japan. The daughter of the late Turuko Ogido ( Mother). She was educated in the schools of Okinawa. Takeko married Earnest Hotchkiss on Jan  7, 1971 in Okinawa, Japan. She worked at In Sink Erator for ten years. Her hobbies included bingo, going to the casino, playing poker, tending to her flowers, but most of all she loved spending time with her family and bingo buddies.

A visitation will be held at Kenosha Funeral Services on Saturday June 18th, 2022, from 1:00pm-3:00pm with funeral services to follow immediately at 3:00pm.