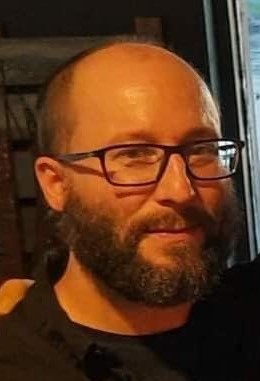 Born on October 20, 1981 in Racine, WI, he was the son of David A. and Darlene A. (Pecsi) Drake. He was a graduate of U.W. Oshkosh with a Bachelor of Arts Degree in Musical Performance.

He is a gifted and beloved musician and music teacher. In high school, he was a member of Tremper’s Golden Strings. He is currently the strings teacher at the Kenosha Conservatory of Music, and a member of Chaine de Gitane (Gypsy Jazz) at Sazzy B’s and Miles over Mountains. He was a former band member of High & Lonesome Boys (one of his first in college), Electric Water Buffalo, American Folk, Cosmic Railroad, The Westerlees, The Dillweeds, and countless others.

Shawn lived for his love of music and helping others. He was a talented violinist and fiddler which included winning the Colorado State twin fiddler championship twice in 2015 and 2016 with Georgia Rae. He also won an individual fiddling state championship. He had a passion for teaching violin, viola, cello, bass, and sharing his love for music with others. Aside from music, Shawn enjoyed attending and playing at a multitude of music festivals. While attending the festivals he enjoyed camping and spending time with fellow musicians jamming around a campfire. He has skateboarded since his teenage years and has continued those friendships, especially with Justin, til this day. He also loved playing chess, with his friend Tony, and enjoyed video gaming.

He will be deeply missed by his parents, David A. and Darlene A. Drake; his brother, Brandon J. Drake of Oak Creek, WI; his nieces, Kennedy A. Drake and Addison G. Drake of Blacklick, OH; his aunts, Patricia (Trish) Darnell of Kenosha, WI and Mary Pecsi of South Bend, IN; his great-aunts, Dolores Jass of Kenosha, WI and Barbara (Joe) Schauer of Maumee, OH; as well as several nieces, nephews, cousins and close friends.