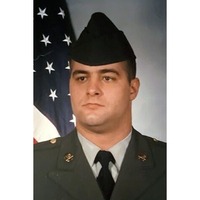 He was born on January 15, 1966 to the late Mark J. and Helen A. (Benuska) Whiteside in Kenosha.  He was educated in the schools of Kenosha graduating from Mary D. Bradford High School where he was involved in wrestling and football.

Shaun entered the Us Army on January 30, 1987.  He was a combat engineer in the 82nd Airborne and was honorably discharged on October 29, 1990. Shaun served as a paratrooper with time spent in Germany. Upon returning home he was a construction worker and general laborer.

Shaun was a huge fan of the Green Bay Packers and loved to ride and show off his Harley motorcycle. He spent a lot of time hunting and fishing with family. He loved all of the family and enjoyed getting together for birthdays, Sunday dinners and Holidays.

He was proceeded in death by his parents, Mark and Helen Whiteside; his grandparents John and Helen Benuska and Walter and Doloris Whiteside.

He is survived by his sister Bridey Fastabend, aunts and uncle, cousins and many nieces and nephews.