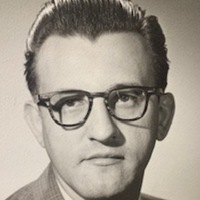 Rudolph J. Havranek was born on June 15, 1927, in Kenosha Wisconsin, the son of Mary Furach and John Stefancic. He was educated in Kenosha and received his BA at the University of Wisconsin-Madison. He then joined the army in 1945 and spent 2 years in Vienna Austria at Headquarters. Rudy married Helen Jerovenko on May 19, 1951, in Milwaukee Wisconsin. He was a freelance artist and worked at his own business, Havranek Advertising Association, located in Kenosha for over 40 years. He was also the Art Director at Burgess Anderson and Tate, a printing firm, in Zion Illinois for 25 years. Rudy enjoyed woodcarving, fine art oil painting, furniture design, and travel. He was also a science enthusiast and kept up with the latest discoveries in space as well as achieving a Black Belt in Karate. Finally, he also enjoyed going to Croatian festivities with family members and spent his weekends antiquing with his wife Helen.

Survivors include his daughter, Gail Dill, son-in-law, Eddie Dill of Pleasant Prairie, Wisconsin and grandchildren Nathan and Sarah. Rudy is also survived by 2 sisters, Madelyn Barefoot and Carolyn Fabian and their daughters Vicki, Andrea and Terri as well as his aunt, Ann Stefancic. Rudy was preceded in death by his parents, his wife Helen, his son Mark, half sister June Kueny, brother John Stefancic jr. and his uncle Milan Stefancic.

A “celebration of his life” get-together will be held privately at a later date with immediate family. In lieu of flowers, Rudy requested memorials be sent to ”Doctors Without Borders”, “Cancer Research” or “Safe Harbor Humane Society”.