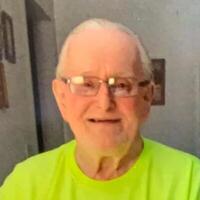 Roger was born on March 26, 1943, in Rice Lake, WI, the son of the late Raymond and Orvilla (Coleman) Phillipsen. He was educated in the schools of Rice Lake. Roger married Kathy Doerflinger on April 16, 1994, in Kenosha. He was employed by Jacobsen Manufacturing for 34 years. His hobbies included hunting, fishing, cheering for the Green Bay Packers and the Chicago Cubs but most of all he loved spending time with his friends and family. He was also a member of Danish Brotherhood.

Survivors include his wife, Kathy Phillipsen of Kenosha;  her children, Jason & John Litz, both of Kenosha. Grandchildren, Jacob, Danielle, Ashley, Alyssa, Zachary & Sebastian , also included are his great grandchildren, Kailey, Brayson, Ava and Damond. Survivors also include his children Carol, Jim, Mike and Kate and their families. Roger was preceded in death by his parents, son, Edmund and his sisters Karen and Rogene.

Per Roger’s request there will be no service.