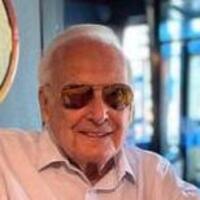 In 1957 he entered the Army, 2nd Armored Cavalry, and was stationed in Nurnberg, Germany as a Radio Code Operator running the Border Radio Net during the German Occupation.  After active duty, he was in the Wisconsin National Guard and later in the Missouri Reserve.  He was also a HAM Radio Operator licensed as WOEMP in Missouri and later as K9SFR in Illinois.

Just prior to getting married, he went to work at International Paper Company.  He worked his way up the ladder and became the Production Manager and Plant Superintendent at Kankakee Container Company when he moved to Kankakee in 1969.

In the late 70’s, he purchased a School Bus Distributorship for Superior Coach School Buses and was named “Distributor of the Year” the first year he was in business.  During the Carter Presidency, Superior Coach discontinued manufacturing buses and Bob transitioned into selling the new line of El Dorado-National small Transit buses and bus parts.

Over the years Bob and Dee, who was a Travel Agent, did a lot of traveling.  They loved spending lots of time in Montego Bay, Jamaica and also taking cruises in the Caribbean.  Dee passed away 15 years ago after a tough battle with Cancer.  Bob slowly then began retiring from sales, but did continue to do a little consulting on the side.

Bob sadly leaves behind his son Bob Babcock (Jen Sepanski) in Pleasant Prairie, his daughter Barb Wagner in Kenosha, as well as his 7 grandchildren.  Bob’s children are Grayson, Mason, Lainee, and Quinn.  Barb’s children are Justin, Morgan, and Jack.

He also wishes to say goodbye to all the fine people that he met at various places in this area.

A memorial gathering will be held at Kenosha Funeral Services on Tuesday October 19, 2021, from 4:00-6:00PM with memorial services to follow immediately at 6:00PM.