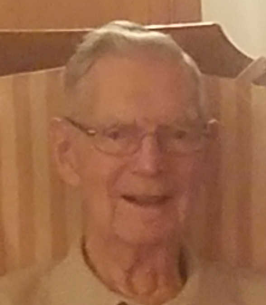 He was born September 18, 1924, in Escanaba, MI, the son of the late Francis and Florence (Mulvany) Finn. Bob proudly served in the United States Army during World War II. On November 24, 1954, he married Shirley Holmgren in Marquette, MI. Together they moved to Kenosha in 1954, where Bob went on to work for American Motors / Chrysler, as the manager of quality control.

Bob was a member of St. Anthony of Padua. He was an avid golfer until just a few years ago. He was a talented woodworker, and enjoyed making birdhouses, baggo boards, and other keepsakes. Bob liked staying busy with various projects.

In addition to his parents, he was preceded in death by his wife of 50 years, Shirley.

Visitation will be held from 10:00 a.m. – 11:00 a.m. on Tuesday, December 28, 2021 at Proko Funeral Home, with services commencing at 11:00 a.m. Interment will immediately follow at All Saints Cemetery and Mausoleum. In lieu of flowers, those desiring may make memorial contributions to the Kenosha Area Family and Aging Services at www.kafasi.org.