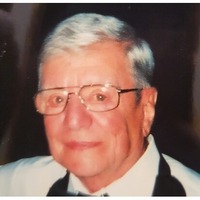 On September 17th, 2022, Richard William Ellis passed away peacefully at his daughter’s home in the presence of his daughter, Roberta, granddaughter, Angela, and dear family friend, Jane.

A member of this country’s greatest generation, Richard was a true patriot, devoted family man and known for his selfless, compassionate and generous nature.

He was born to Floyd and Grace Ellis on February 25th, 1927. At the age of 16, Richard eagerly enlisted in the US Navy to proudly serve his country in World War II. Ultimately, the USS LST460 was attacked by kamikaze planes off the coast of Mindoro, Phillipines.  As a result, Richard received a Purple Heart due to injuries he sustained. Upon his return home to Kenosha, he met his beloved Grace. They married on March 4th, 1950.

Richard instilled in his family a strong work ethic, serving as a welder and promoted to a testing specialist and radiographer at Wisconsin Natural Gas Company for 30 years. Following his retirement in 1992, he could often be found helping family and friends without hesitation, cycling, exercising, golfing or hunting with long time hunting buddy, Darrell Borger. His support of hobbies and interests often meant he would join along with you.  Richard described one of the most memorable days of his life as having the privilege to take part in the Honor Flight with his daughter, Roberta, on November 1st, 2014.

Richard’s comical phrases, endearing chuckle, unconditional love and firm handshakes will be forever missed but always in the hearts of his family and friends.

The family would like to extend its gratitude for the outstanding and gracious care given by Hospice Alliance of Kenosha.  With special thanks to his nurse, Susan, for the compassionate care, dignity and respect in which she treated Richard.  Also, thanks to Sandy, Heidi, Jessica, Becca and Gail. Additionally, a special thanks to Dr. Joseph Goveas and Dr. Friedl for coordinating Richard’s care.

If loved ones feel so inclined, the family requests donations be made in Richard’s honor to: St. Jude Children’s Hospital, the Hospice Alliance of Kenosha or the Alzheimer’s Foundation of America.

To send a flower arrangement or to plant trees in memory of Richard William Ellis, please click here to visit our Sympathy Store.