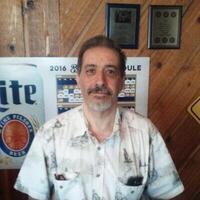 Richard Nemeth, 67, of Kenosha passed away on April 27, 2022, at Aurora Medical Center of Kenosha surrounded by his loving family.

Richard was born on January 22, 1955, in Kenosha, the son of the late Albert and Isabelle (Conforti) Nemeth Sr. He was educated in the schools of Kenosha. Richard married Marianne Regalado on May 18, 2013, in Kenosha. He was an owner at Rick’s Alley Cat, Rickie’s Greyhound for many years. Richard was a member at St. Marks Catholic Church. His hobbies included hunting, NASCAR, cheering for the Chicago Bears but most of all he loved spending time with his friends and family, especially his grandchildren.

A visitation will be held on Tuesday May 3, 2022, at Kenosha Funeral Services from 11:00AM-1:00PM with funeral services to follow immediately at 1:00PM. Burial will be at All Saints Cemetery.