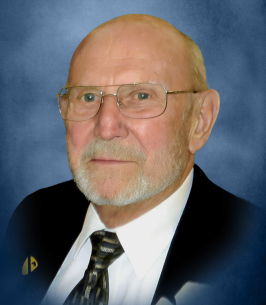 Dick was born on July 23, 1930, to the late Julius and Esther (McCosky) Hunkeler in Kenosha, WI. He was educated in local schools and graduated from Kenosha High School in 1948.

He was preceded in death by his brother and sister-in-law, Lee and Dolores Hunkeler; and a brother-in-law, Elmond E. Decker.

Dick was devoted to his family and loved all of them deeply. He was proud of his children’s and grandchildren’s activities and accomplishments. He enjoyed their many sporting events, plays, and musical performances. Dick played many sports and ran track in high school. He loved playing golf into his senior years. He loved big band music, including the Kenosha Pops concerts.

He took pride in his military service during the Korean conflict. He enlisted in the Army in 1952 and served in Korea with Fox Company, 7th Cavalry Regiment, 1st Cavalry Division. He was a member of the Korean War Veterans.

Dick worked for 40 years at Johnson Motors of Outboard Marine Corporation in Waukegan, starting as a toolmaker, and retiring as Manager of Machining Operations. He received his associate degree from the Industrial Management Institute at Lake Forest College in 1971.

Visitation will take place on Friday, April 15, 2022, at Proko Funeral Home from 10:00 a.m. until the time of service at 12:00 noon with full military honors. To live stream the service, click the following link at noon https://client.tribucast.com/tcid/7262389338