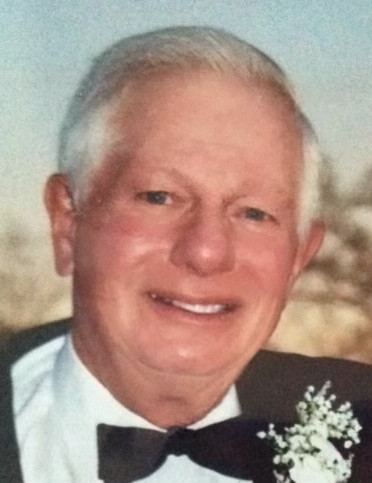 In deep sorrow and heavy hearts, we inform you that Raymond Richard McKenzie, at the age of 89, passed away on Tuesday May 10th in his sleep at home. Ray was born December 6th, 1932 in Chicago, Illinois. During the Korean War, he proudly served his country.   In addition to his beloved wife Carole McKenzie, son Ryan McKenzie, his parents Evelyn and Albert McKenzie, and brother Albert McKenzie have all preceded him in death.  His love for his children, Rick (Nan), Cathy, Colleen (Mark), and Carrie (Don) and daughter-in-law Claire will be remembered, as well as for his eleven grandchildren, Nicole (Terry), Jimmy (Bridget), Ricky (Ali), Kevin (Kacie), Kelsey, Katie, Matthew, Keenan (Rosella), Franki, Angela, Kamryn, and five great grandchildren, Peyton, Jimmy, Cove, Owen and Ryan. He was a devoted father, grandfather, and great grandfather who always valued hard work and often said, “Work first, play later”. Over the course of 30 years, he worked hard at Western Electric, served part-time as a police officer in Norridge City for 35 years, and has been very active in the community. Despite that, he was always prepared to lend a helping hand to those in need.  Watching and listening to him, people learned how to use just about any tool one could imagine.  His passion was golf. Whenever he traveled, he took his clubs with him in order to play golf. In particular, he enjoyed playing golf with his two sons. He played thousands of rounds of golf at Twin Lakes Country Club and other courses throughout the country, often 36 holes in a single day.  However, his hole in one at Twin Lakes was one of the highlights of his golfing experience. He enjoyed dancing, so many people waited to get to dance with him. Dad, PaPa, My Friend you will truly be missed by everyone who knew and loved you. Besides his immediate family, Ray leaves cherishing his loving memories of his friends from Norridge IL., Lily Lake WI., Corpus Christi TX. (Winter Texans) and a host of nieces, nephews, cousins.