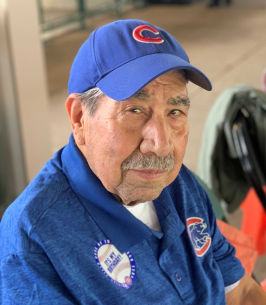 Ramon G. Serrano, 87, of Kenosha, passed away on Tuesday, October 5, 2021, at Froedtert Pleasant Prairie Hospital surrounded by his loved ones.

Born on June 23, 1934, in Monterry Nuevo Leon, Mexico, he was the son of the late Jose Serrano Ruvalcaba and Maria Cruz (Garcia) Serrano.

Ramon had been a lifelong Kenosha resident since 1959. Ramon worked as a forklift operator at American Brass where he was loved by all until his retirement in 1993.

He was an avid Cubs fan who enjoyed celebrating his birthday at Wrigley Field every year. He had a great sense of humor and loved to dance and spend time with his family, who loved him dearly.

Ramon is survived by his doting wife, Maria Serrano; devoted daughters, Maria (Christopher) Perez and Alejandra Serrano; his beloved grandson and light of his life, Ryan Perez; and grandchildren, CJ, Eli, and Destiny Perez who was his loving caregiver for the last two years.

He was proceeded in death by his parents; three brothers, Jose, Benjamin, and Luis Serrano; and three sisters, Carmelita Serrano, Rosita Contreras, Margarita Gamboa and his sister-in-law, Alicia Serrano.

The family would like to give a special thanks to longtime friends Tono and Linda Rosales and Grupo Una Luz En Kenosha.

Visitation will take place on Monday, October 11th, 2021, at Proko Funeral Home from 9:00 a.m. until 10:30 a.m. A Mass of Christian Burial will be held following visitation at Our Lady of the Holy Rosary Catholic Church, 2224-45th Street, at 11:15 a.m. Interment will follow at St. George Cemetery.