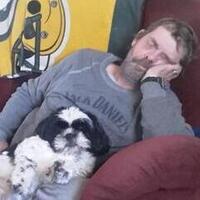 Ralf Lawrence, 60, of Kenosha passed away on Sunday December 19, 2021 at his home surrounded by his loving family. Ralf was born on May 31, 1961 in Germany, the son of Carl & Ingrid (Padre) Lawrence.  He was educated in the schools of Kenosha.  Ralf married Toni Gamble on August 20, 1994 in Kenosha.  He was a self-employed auto mechanic for many years.  His hobbies included fishing, hunting, model train sets, playing video games, working on cars, cheering for the Packers, and spending time with his family & friends. Survivors include his wife, Toni Lawrence of Kenosha; children, Allan (Rebecca McMaster) Lawrence of Milwaukee, David (Theresa) Lawrence of Racine, Timothy (Ashley) Lawrence of Burlington; father, Carl Lawrence of CA; and 10 grandchildren.  Ralf was preceded in death by his mother, Ingrid. A celebration of life will be held on Saturday January 15, 2022 at Candlewood Suites, 10200 74th St, Kenosha, WI, 53142, from 1:30PM-4:30PM.