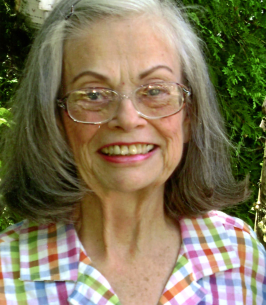 She was a darling child and a beautiful young woman with musical and singing talent. She and her sister sang and played their ukuleles for various organizations, church groups, their school, and for nursing homes. She graduated from Taccoa Falls University High School in Georgia. They were the princesses of the spring festival.

After she moved to Kenosha, she worked for the Barbershop Quartet Singers of America. She especially loved her time of working with the children’s program at the Kenosha Library. She married Victor Sartor, an accountant, and they celebrated their 50th wedding anniversary before he died in 2014. They enjoyed quiet country drives and daily Bible studies together. They traveled yearly to California before they moved her sister Peggy to Kenosha. Patsy and Peggy enjoyed several years of crafting and volunteering in nursing homes to visit and cheer the residents. Patsy had several pen pals from around the world who were dear to her. She was a member of the Twinless Twins organization after the untimely death of her sister Peggy in 2007.

Patsy was preceded in death by her devoted husband, Vic, her parents, her sister Peggy Ghiglione, her brothers Daniel Jackson and Robert Bruce Jackson, and her mother and father-in-law.

She especially appreciated her dear friends and loving caregivers at Oak Park Place and her Hospice caregivers. She greatly valued the care and spiritual guidance from Pastor Phil Ace. Patsy was committed to the Christian walk with her Lord and Savior Jesus Christ, and this sustained her through her many trials and tribulations as well as the joys of her life. She was very loving and well loved by all who knew her. She is already dearly missed and will always remain in our hearts.

Private family services were held and Interment was at Sunset Ridge Memorial Park.