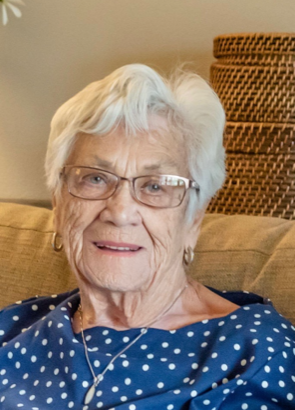 She was born in Sorrento, Illinois on August 4, 1926, the daughter of the late Roy and Etta (Fenton) McGibany.  She moved to Kenosha in 1945 after living in Chicago, Illinois with her best friend Edna Ruhle.

On September 7, 1946, she married the love of her life Joseph Ruhle after being introduced to him by her best-friend, Joseph’s sister Edna.  Joseph passed away in May 2016 which was just short of their 70-year wedding anniversary.

Opal was a dedicated mother, mentor, and friend to Linda, Gary, and Dennis.  They were a continuous focus of throughout her life.

She worked as a cashier at Gorecki Sentry Foods in Kenosha for 25 years before retiring in 1985.  There she met many customers and coworkers that she would meet around town after retirement.

Opal was preceded in death by her parents, husband Joseph, her siblings Wayne and Carl McGibany and her best-friend Edna Pringle. She is survived by her children, Linda (Gene) Schulz of Yorkville WI, Gary (Patti) Ruhle of Appleton, WI, and Dennis (Nancy) Ruhle of Kenosha, WI. She is further survived by her grandchildren, Kari (John) Andreoli, Denise Schulz, Traci Flitsch, Ryan Ruhle, Devon Ruhle, Marin (Max) Zbilut, and Joseph Ruhle; great grandchildren, Jared (Ashley) Andreoli, Khloe (Michael) Lory, Brendan and Mallory Farmer, Vera and Casimir Zbilut, Tyler and Ashton Flitsch, Skylar and Damien Ruhle and a great-great grandchild Jack with another due in February.  She is also survived by her brother-in law Eugene (Jennie) Ruhle.

Funeral services will be held on Wednesday February 16th, 2022, at 11:00AM in the Kemper Center Founders Hall. (6501-3rd Avenue) Visitation will take place on Wednesday in Founders Hall from 10:00AM until the time of services.