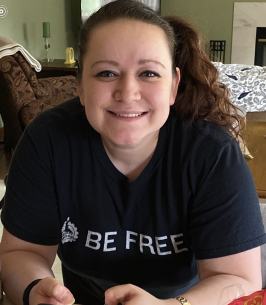 Oksana was born in Kurgan, Russia, on January 17, 1995, and was the daughter of Kathy Pfaffle and the late Patrick Pfaffle, and dear sister of Nadya.

She was a 2013 graduate of Tremper High School and graduated with a Bachelor of Science degree in criminal justice from Carthage College in 2017. For many years Oksana worked in security in the Milwaukee area and in Lake County, IL.

Oksana began riding horses while in elementary school. She joined a Kenosha 4-H club and in middle school she began competing at both the county and state levels, where she won various awards.

Oksana began playing violin in fourth grade. She continued in orchestra throughout high school, joining the Golden Strings strolling strings group when she was a sophomore. She loved the camaraderie of the group, and had the opportunity to travel with them to perform in several places including Florida, Washington D.C., and an Alaskan cruise.

She was able to accompany her dad on two Carthage College Nicaragua Program trips to Ometepe, Nicaragua, and spent her 18th birthday in Nicaragua. Oksana often talked about her experiences there, learning about the people and culture, climbing the volcano, horseback riding on the beach, even zip lining.

Oksana met her boyfriend, Dustin Branton, in fall of 2020. They had a strong and loving relationship and in March 2021, Oksana moved to Arlington to be with Dustin.

She was preceded in death by her father Patrick, and grandparents Roger Pfaffle, and Florence and Robert Feil.