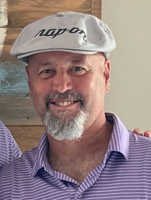 He was born May 11, 1962, in Ironwood, MI the son of Douglas and Sheila (Valetti) Hultner. Norman attended local schools and graduated from Tremper High School, Kenosha WI. He went on to work for the City of Kenosha in the Waste Division. On September 18, 1982 he married Terri Wilson at Bethany Lutheran Church.

Norman was an avid Green Bay Packers fan and season ticket holder. He loved watching the Detroit Red Wings, riding his Harley motorcycle, golfing, and bowling in his Monday and Wednesday night leagues at Sheridan Lanes. Norman enjoyed being a Kenosha Kingfish Host Family and attending games there. He was proud to be a foster parent of multiple German Shepherds through the organization Rettungs-Haus Shepherds, Inc. He was a family man, and cherished the time spent with them. His grandchildren were the “joys of his life”.

Visitation will be held from 2:00 p.m. – 5:00 p.m. on Tuesday, December 7, 2021 at Proko Funeral Home, with services commencing at 5:00 p.m. Interment will be private. In lieu of flowers memorials can be made to Norman’s family for donations to organizations he cared about.