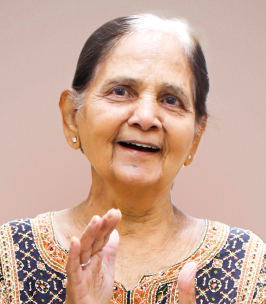 Narbada Shah, an adventurous cook, traveler, mother, grandmother, great grandmother, and proud Gujarati, who made her home in many places throughout her long life, passed away March 4, 2022, in Kenosha, WI, at age 92.

Narbada was born on August 19, 1929, in Aden, Yemen, where she lived with her parents and six siblings. When she was 5 years old, her father passed away, and she moved with her mother and siblings to Sutrapada, India, where her mother’s family lived. She attended boarding school and had fond memories of her time with her siblings in her mother’s home village until she was 15 years old. At age 15, in 1944, she was married to Parshotam Shah and moved with him to Ethiopia where he owned a store and there was a large Indian community.

The couple had four children—Mahesh, Vinod, Chanden, and Nayna—and they moved several times to different locations around Ethiopia. Narbada recalled her life there fondly, and was not only excellent at making Indian food but Ethiopian dishes as well. Her youngest daughter, Nayna, died of cancer at age 12, and then years later, after her two oldest boys were away at school in Kenosha, WI, at Carthage College, her husband died suddenly of a stroke. The boys then worked to bring their mother and sister, Chanden, to live with them in the United States.

Narbada arrived in Kenosha, Wisconsin, in October 1974 and moved in with Mahesh and his family. Narbada later described this time in her life as “boring” because the others would go to work all day, so she entertained herself by walking to the grocery store to buy potatoes, onions, and lentils. She would then make food as best she could without all her spices. But while she missed her spices, she immediately took to the local fashion and enjoyed wearing pants and the variety of colorful printed shirts available in 1970s Wisconsin. She continued to prefer clothing with loud patterns for the rest of her life.

She eventually moved to Milwaukee, got a job at a factory, and then moved on to working as a nanny and cook for several families in the area. She led a very independent existence, and in her free time, Narbada made a point to go to the casinos. She was a tiny card shark with long, jet black hair who took everyone by surprise. She also loved travel and frequently went back to visit family in India and Dubai, as well as exploring other places. She lived briefly with her daughter Chanden and her family in Japan and traveled around Asia.

Later in life, she found travel easier with a companion and relied on one of her granddaughters, Jasmin, to accompany her on weeks-long trips to Dubai and India. Narbada was happy to be a grandmother and great-grandmother, and she enjoyed spending time with her granddaughter Anjuli’s children—Harper, 8, Sydney, 6, and Greyson, 5—in Minnesota on extended visits. She often sat on the sunny window bench to watch them play, and the kids loved her Indian food as much as she loved cooking it. (As anyone who knew her would say, she was the best cook!)

Narbada made friends everywhere she went, and for the last 14 years of her life, she made Kenosha, WI, her home (or at least her home base) once again. There was a large contingent of people around town who would shout “Shah!” whenever they saw her around the apartment building or eventually the assisted living facilities where she lived. She had moved to a new home only a two weeks before becoming ill with pneumonia and complications from her congestive heart failure, yet had already made quite an impression with the string of visitors she had in that short time.

Narbada Shah was preceded in death by her husband, Parshotam Shah, and all four of her children, Mahesh Shah, Vinod Shah, Chanden Hansen, and Nayna Shah. She is survived by her grandchildren, Jasmin Shah, Anjuli Glaza, Stephen Shah, Jacob Hansen, and Anil Shah, and five great grandchildren.