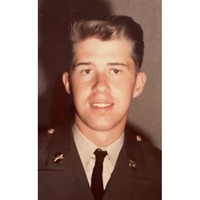 He was born August 9, 1951 to the late Robert and Eleanor (Craig) Seversen.

Mike served in the U.S. Army as a vehicle mechanic during the Vietnam War and also served in Korea.  Mike enjoyed watching car racing, working on cars and listening to music. He loved his dogs and proudly sponsored a child through St. Jude’s Children’s Research Hospital.

He is survived by his brother Larry Seversen of Houston, Tx; his children, Carey (Seversen) and Michael Johnson of Kenosha, WI, Michael B. Seversen of Round Lake Beach, IL and Stacy Seversen of Cary, Il, nieces, nephews, grandchildren and a great-grandchild.

Mike will be laid to rest on February 18, 2022 at 2:00 at the Southern Wisconsin Veterans Memorial Cemetery in Union Grove, WI with military honors.

In lieu of flowers, donations may be made to St. Jude’s Research Hospital as this cause was dear to his heart.