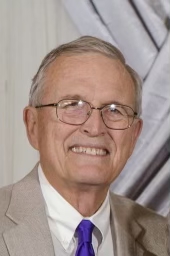 Mike moved to Wausau, WI with his family at a young age. He was educated in the Wausau schools, and he graduated from the Business School at the University of Wisconsin Madison in 1957. He also received a commission in the U.S. Army and he served seven years in the Army Reserve.

Mike was a vice-president in sales for Bradner Smith & Company, a printing paper distributor in Chicago IL. He retired after 33 years of service in 1997.

Mike and Sue were members of The First Presbyterian Church in Kenosha. For some years Mike was a member of the Carthage College Community Choir and Masterworks Chorus. He also enjoyed playing tennis, fishing, and spending time at his lake house in Eagle River WI. He loved attending school, music, and sporting events with his grandchildren.

He is preceded in death by his parents and a brother and sister-in-law, Allan, and Georgia Carswell.

Due to the pandemic, there will be no services at this time.