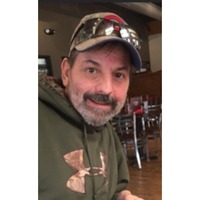 Michael graduated from Oregon High School in 1986 where he was on the golf and baseball teams. Upon graduation, he proudly served his country for 4 years in the U.S. Army, 3 of them in Korea as a Blackhawk Helicopter Mechanic and Crew Chief. He continued to serve with The National Guard for several years.

Michael worked in IT Storage Architecture at Abbott Laboratories/ Abbvie for 26 years. He married Richelle Lubben in 2008 and they lived in Bristol, Wisconsin.

Together they have 12-year-old twins, Lucas and Avery. Michael was a lifelong fisherman and passed that passion on to his son. He was a big Chicago Bears and Cubs fan and also rooted for the Wisconsin Badgers. Michael played on softball and golf leagues throughout the years. He enjoyed taking trips with his family and spending quality time with his kids.

Survivors include his wife, Richelle, his son, Lucas, and his daughter, Avery of Bristol, his mother Kristine Squier of Oshkosh, WI, his sisters, Jacki Anderson and her daughter Katlynn Dietzen of Grafton, WI, Muffi Anderson (Denton) and their sons Quentin, Brayden, Dennis, Robert, and William of River Falls, Wi, Niki Jo Nodolf (JD) and their daughters Makayla, Jade, and Madison of Mineral Point, Wi.

Memorials can be made to https://www.fishingwithvets.com/donate