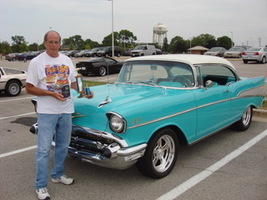 Michael A. Bojesen, 83 years old of Pleasant Prairie, WI passed away unexpectedly on Monday, February 14, 2022, at his home.

He was born August 4, 1938, in Evanston, IL the son of the late Michael and Rosemary (Simpson) Bojesen.

Mike loved going up North to their Park Model Trailer. This was his and Bev’s happy place where they enjoyed socializing with their friends. He looked forward to his Friday morning breakfast with good friends and once a month breakfast with Bev and their friend Cindy. Working on his 1957 Chevy was his passion and pride and joy. Having classic cars was how he became a member of the Kenosha Classic Street Machines and the Legends. Mike also enjoyed snowmobiling.

People always said that Mike could do anything, and he could. Electrical, plumbing, carpentry, he did it all. His specialty was cars, he could look and listen and tell you what was wrong with your car and fix it. It was a gift. He would have parts, screws, and bolts laying all over the floor and knew exactly where everything went to put it back together. People that knew Mike, know he didn’t have a mean bone in his body. He was kind and generous to everyone and if you needed help, he would be there.

Mike lived a full and very happy life with his wife Bev. They were always together whether it was daily runs to Menards, which they would joke about owning half of the store or stopping for lunch at one of their regular places. Mike enjoyed teaching Bev’s son Bob all the trades by helping him remodel his house and of course mechanics which seemed to be a weekly thing on his Lexus and doing minor fixes on Bev’s grandkids cars. He would say, “just bring it over and I’ll look at it.” He was proud of his sons Mike and Steve and all of their accomplishments. He was always bragging about them and their wonderful families. It was obvious that they inherited their dad’s work habits, which made them successful.

In addition to his parents, Mike was preceded in death by his wife Suzanne; son Steven Bojesen, stepson Chris DeHaven, and brother Bruce Bojesen.

Visitation will be held from 2:00 p.m. – 4:00 p.m. on Sunday, February 20, 2022, at Proko Funeral Home with services and military honors commencing at 4:00 p.m. Interment will be private in Salem Mound Cemetery, Silver Lake, WI. In lieu of flowers, those desiring may make contributions to a family memorial.