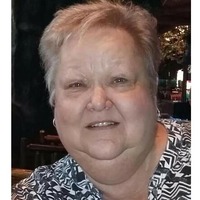 Kay Johnson, 74, of Kenosha passed away on Saturday September 11, 2021, at Froedtert Milwaukee.

Kay was born on December 9, 1946, in Kenosha, the daughter of the late Leo & Cecilia (Monnier) Koenig.  She was educated in the schools of Kenosha.  Kay married Thomas O. Johnson on June 11, 1971, in Kenosha.  She was a homemaker for many years, previously working at Wells, manager at Houseware Outlet,  and also was a receptionist for, Dr Houtchens DDS.  She was a member of St. Therese Catholic Church.  Kay was also a member of the Kenosha Moose Lodge 286 Chapter 155.  Kay’s hobbies included crafting, quilting, knitting, doing puzzles, going to craft fairs, rooting on the Packers & Brewers, but most of all spending time with her family & friends, especially her cats and grand dogs.

A visitation will be held on Monday September 20, 2021, at Kenosha Funeral Services from 4:00PM-6:00PM, with funeral services to follow at 6:00PM.  Burial Southern Wisconsin Veterans Memorial Cemetery at a later date.

Kay’s family would like to thank, her cousin, Mimi for all of the love & support that she showed Kay throughout the years and the staffs at Froedtert ER, Paratech Ambulance, Dr. Chua, and the Kenosha Fire Dept.