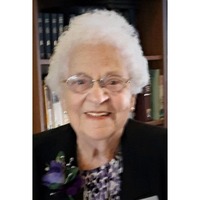 She was born on October 15, 1928, to Joseph and Ethel (Grunland) Schweitzer Sr.  She was educated in the schools of Kenosha and graduated from Kenosha High School in 1946.

While working at Quaker Stretcher in July of 1949 she met Harold R. Piehl.  Six months later on January 20, 1950 they were married at First Presbyterian Church on Roosevelt Road. They have been married for 71 years.

Marcy worked at Quaker, Warwick’s and was a stay-at-home mother of three until her youngest daughter went to school. She then worked at JC Penney’s and Allie’s Fine Clothing store.

Marcy’s greatest joy was her family.  She never said no when asked to watch over her five grandchildren or any of her great-grandchildren.  Playing games, puzzles, playing cards or just singing kid songs.  She also loved crossword puzzle. Her family was always around the pool in the back yard for the last 50 years. Plenty of kids, she loved that.  She also loved baking chocolate chip cookies.

She was active with the band boosters when her daughter Betty was in color guard. She watched her grandkids play soccer, swim meets, play baseball and football during their high school years.  Chaperoning the kids on many school trips.

Marcy was a member of First Presbyterian Church for 71 years.

She was preceded in death by her parents, three brothers Joseph Jr., Donald and Jerry (infancy) and two sisters Betty Kouris and Doris Ropp. Son in law James McGovern.