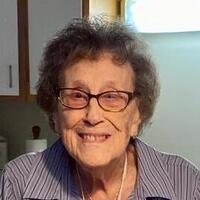 She was born on March 15, 1922, in La Crosse, Wisconsin, to Albert and Elnora (Geier) Frederick. She attended Holy Trinity Catholic School and graduated from Aquinas High School in La Crosse, WI.

On August 20, 1939, she married William (Bill) Francis Herde in Hamlet, South Carolina. They raised 6 children, Carol, Larry, Michael, Susan, Robert, and Debra. Lou had 13 grandchildren, 28 great-grandchildren, and 8 great, great-grandchildren with number 9 (a boy) due in March 2022. She worked at Kenosha Memorial Hospital as a CNA and ward secretary for over 25 years.

Lou was a devout Catholic and a member of St. Elizabeth Catholic Church. She started and faithfully led a prayer group, Cenacle of the Marian Movement of Priests, in Adams, WI, and then here in Kenosha for many years.

One of Lou’s greatest enjoyments was spending time with her family. She loved watching her grandchildren and great-grandchildren’s school programs and sporting events. Lou was an avid, skilled bridge player all of her adult life.  As past times, she crocheted and painted ceramics. Throughout the years, Lou and Bill enjoyed camping, fishing, traveling, bowling, going to the casino, playing cards, deer watching, and taking drives. She was an enthusiastic Green Bay Packers fan and looked forward to each Packer football season.

Lou was preceded in death by her husband, Bill, a daughter, Carol Fox, a grandson, Jeffrey Fox, in infancy, and her three brothers, Harold Frederick, Donald Frederick, and James Frederick.

In lieu of flowers, donations to Hospice Alliance or Parkside Manor would be appreciated.