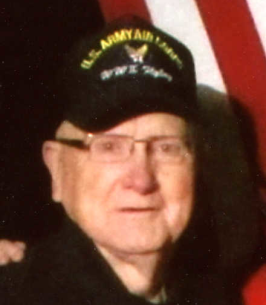 He was born on February 28, 1928, to the late Louis and Katherine (Seiberlich) Kramer in Kenosha, WI. Louis attended St. George Catholic School and then Kenosha Vocational School while working at Nash Kelvinator at the age of 16. Just before his 18th birthday, Louis and three of his friends enlisted in the United States Army Air Corp. He proudly served his duty in the territory of Alaska prior to being honorably discharged on December 31, 1948. Louis then returned to work at Nash Kelvinator (American Motors) as a paint repairer.

In 1986 Louis retired from American Motors and they moved to Maryville, TN near Great Smoky Mountain National Park. They lived there for 15 years before returning to Wisconsin in 2001 due to health issues. While living in Tennessee, Louis loved traveling to destinations up the east coast; Myrtle Beach, SC, Cherokee, NC, and Dollywood with his grandchildren, were a few of his favorite places. Louis enjoyed donning his lighted Christmas hat and handing out candy to the kids, a different time in America!

Louis loved to fish, spending many hours ice fishing with his father and two brothers. They never let the weather discourage them, and often came home with a big catch.

After returning to WI, Louis & Shirley enjoyed trips to Potawatomi Casino and Oneida Casino. He was luckier than most and enjoyed socializing there. Louis was likeable and could talk to anyone about anything and had no hesitation in starting a conversation.

An avid union man, Louis was proud to belong to UAW. He spent many hours picketing to obtain benefits and more favorable working conditions. He liked going to “Thursday morning donuts” at Union Headquarters. Louis also belonged to the American Legion and the Knights of Columbus. In 2018, he went on the Honor Flight with his daughter and companion; it was a wonderful trip. Prior to Covid, Louis enjoyed time spent at the Hero’s Café at Festival Food and was never without his special Army Air Corps hat. He was proud to have served his country.

Surviving Louis is his wife of 70 years, Shirley of Pleasant Prairie; his daughter, Paula Jean (Richard) Gallo of Kenosha; grandchildren, Jason (Angela) Cabell of Grafton, Amanda Gallo of Kenosha, Caitlyn Gallo of Kenosha, and Stephanie Gallo of Dallas; great-grandchildren, Alexis and Ethan Cabell, and Logan Bartelheim. He is further survived by his kid brother, Robert (Sally) Kramer of Stoughton, WI; and many nieces, nephews, cousins, great-nephews and nieces. He loved his family dearly, cherished time spent together, and always wanted to know how they were doing.

In addition to his parents and his son, Louis was preceded in death by his sister, Katherine Lyons; brother, Francis Kramer; nephew, Ron Kramer; and niece, Barbara Greenwald.
While saddened of Louis’ loss, the family is thankful that Louis was a 35-year cancer survivor and that Covid nor cancer took him.

The family would like to extend a heart felt thank you to the emergency response personnel who transported Louis to the emergency room, the staff at Aurora Medical Center and Hospice Alliance. Special thank you’s to Dr. Garretto and Dr. Amed, who tended to his health concerns; and to Father Carlos of St. Mark, for his spiritual well-being.

A Mass of Christian Burial will be held at St. Mark the Evangelist Catholic Church at 10:00 a.m. on Friday, November 5, 2021. Interment will immediately follow at St. George Cemetery.