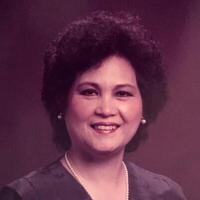 Leony was born on March 19, 1934 in Lupao, Philippines, the daughter of the late Alejandro Buencamino and Ana Ferrer Buencamino.  She was educated in the schools of the Philippines.  Leony married Rodrigo A. Mata Jr. on June 19, 1958, in Manila, Philippines.  Family always came first for Leony who was a caring homemaker and passionate cook. She sacrificed her professional aspirations after immigrating to the United States by taking care of her 5 children and eventually 14 grandchildren. Her hobbies included sewing, painting, dancing, cooking, and socializing with family & friends.

Leony is survived by her husband, Rodrigo A. Mata Jr. of Kenosha; children: Rodrigo B. Mata III of Kenosha, Gerlee Hibbard of Kenosha, Emily and Jack Nehmer of Racine, Rizaldy and Ann Mata of Milwaukee, Lyndon and Ginny Mata of Broomfield, CO; sister, Mystic Toledo of Seattle, WA; and 14 grandchildren.  Leony was preceded in death by her brother, Reneir Buencamino, her sisters: Sister Johanni Buencamino, Lally Evangelista, and Josefa Arzadon.

Special thanks are extended to Dr. Quddus for his excellent care of Leony and to Seasons Hospice for their timely response and compassionate care.